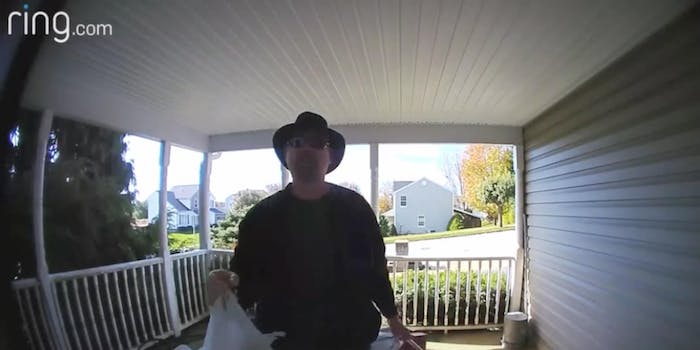 While TikTok creator Emily Brand (@emilyybrandd) was away at college, her dad made sure to say hello every day via their home’s Ring doorbell.

Ring doorbells are a measure of home security involving a digital doorbell with video and sound recording capabilities. While some users employ the doorbell to let them know when their children get home from school or as a deterrent to thieves looking to steal packages, Brand uses it to keep in contact with her father.

“I told my dad I watch the ring videos at home when I’m away at college and he started leaving me messages,” Brand wrote on TikTok, where the video went viral.

The video also went viral on Twitter, where it was reposted by user @allisonr_.

In the video compilation, in one greeting, Brand’s father tells his daughter he got $9 off a purchase at Rite Aid. In others, he tells her about the drizzling rain and cold weather. Most of the clips start off with Brand’s father saying, “Hey Em.”

“Hey Em. Sorry, I couldn’t read your text yet. I was driving,” he says in one clip. “Hey Em, imagine you’re pregaming right now,” he says in another. He also tells her to have a great day on numerous occasions.

On Twitter, the sweet video has commenters praising Brand’s father for his sense of humor. “That’s a classic,” one said of his “pregaming” remark, with another calling him “precious.”

Others think he looks like Walter White, the crystal meth-cooking science teacher from Breaking Bad.

“Your dad doesn’t happen to own an RV and take sporadic trips to the New Mexico desert, does he?” Twitter user @chipoffyoblock questioned.