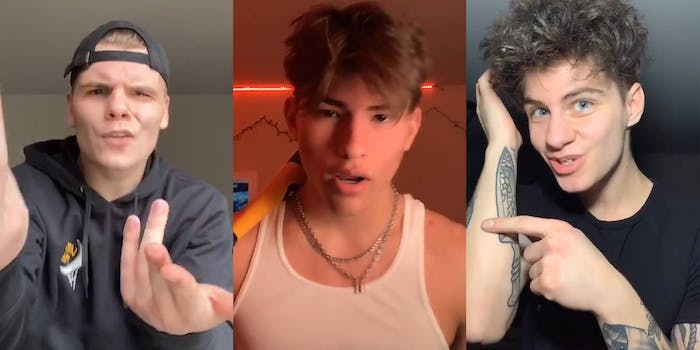 Some have accused the videos of romanticizing abuse.

A disturbing new trend has emerged on TikTok in which men and boys impersonate abusive, “crazy” ex-boyfriends.

A search of “crazy boyfriend” or “psycho ex” on the video-sharing app reveals dozens of POV (point-of-view) videos in which guys stare creepily (lustily?) at the camera as music plays in the background, often snarling or lunging toward the camera when the song reaches a drop. Take this video from TikToker Skylar Haus, who mugs in front of the camera while holding a baseball bat and making a slashing motion under his throat.

One sample caption of a related video reads, “pov: I’m your psycho ex boyfriend and I corner you at a party to tell you this…” The chorus to LoveLeo’s “BOYFREN” plays in the background (“You should break up with your boyfriend and get with me”).

It’s disturbing to see so many TikTokers romanticize abusive behavior for likes, but the makers of these videos insist they don’t condone this behavior or model it in real life. Many of them, like 16-year-old TikToker Ryan Esling, draw inspiration from shows like Netflix’s You, which stars Penn Badgley as a serial killer whose charming facade masks his abusive behavior.

“I was inspired by these shows to create different characters, as it seemed to attract the teenage demographic the most,” Ryan told Vice. “I was faced with a lot of comments from girls saying it’s attractive.”

Likewise, many female users commenting on these abusive ex-boyfriend videos find the “bad boy” persona attractive, even if they recognize the toxicity of those actions and would never desire those qualities in a real-life partner. One anonymous TikTok user tells Vice, “I’m less attracted to the fact that the guy is portraying a psychopath, and more to the fact that I can connect it back to characters I liked in movies and TV shows.”

Of course, this is a dangerous mental game to play—especially as domestic abuse has reportedly increased during quarantine. Relational abuse in all forms is reprehensible and should be summarily condemned. Its romanticization in TV/film and on social media can be triggering to abuse survivors and further normalize toxic behavior, regardless of its intention.

Some TikTok users have made that point in regards to the emerging abusive ex-boyfriend video trend, with one user commenting on a video, “Can we stop glorifying abusive relationships? You wouldn’t be making cute lil TikToks about it if you actually knew what it felt like to be in one.”