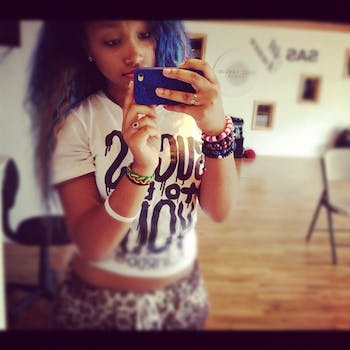 In a comment, a young Instagram user asked the rapper's stepdaughter, "Can we f*ck?" T.I. was not amused.

The rapper took offense to a young man who commented on his stepdaughter’s Instagram self-portrait, asking Zonnique Pullins for sex.

According to TaleTela, the boy asked Pullins, “Can we fuck?,” in a comment which now appears to be deleted. However, the comment did not escape the attention of T.I., who responded in kind.

“ni**a u ever disrespect me & mines like that again I’m gon throw more $$$ at ya head than it cost to build yo mama a new house,” wrote T.I., who uses the handle @troubleman31 on Instagram. “Boy don’t fuck your sad ass lil life up before u can get it started…u gon get yaself “Fucked” aight…in ya mouth wit ya own lil pee-pee… Now keep playin round wit it lil homie. #NoBullShit”

The tirade was praised by other Instagrammers.

“Yahll Cant Get Mad at @troubleman31 Because He stood up for he Daughter! UNCLE TIP IS THE BEST!” proclaimed @colormebahja.

“I’m glad @troubleman31went on him,” wrote @stormyluvya. “I’ll be mad too if someone said that about my daughter”

@Kennasade applauded the rant too: “That’s how a real daddy does it, @TroubleMan31!”

Not everyone took T.I.’s side though:

“Come on, delete your comment for u get in some more trouble. You too grown for that,” urged @stoneyocean.