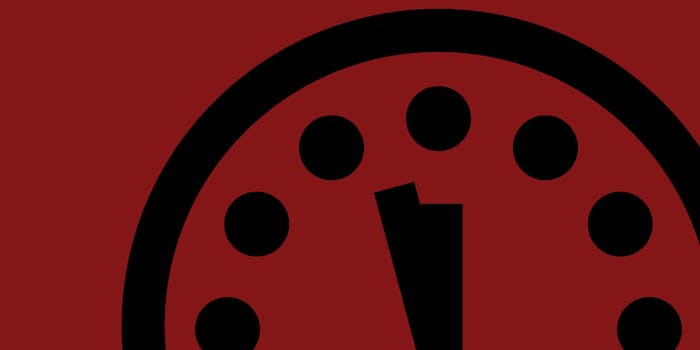 The Bulletin of the Atomic Scientists announced Thursday it will move its metaphorical Doomsday Clock up to three minutes before midnight. That’s the closest humanity has been to this scientifically approximated end of the world since the Cold War.

Before moving the hand up two minutes from its previous position, executive director and publisher of the Bulletin Kennette Benedict cited global warming and mankind’s irresponsible stockpile of nuclear weapons as the leading factors in this calculation.

“Today unchecked climate change and a nuclear arms race resulting from modernization from huge arsenals pose an extraordinary and undeniable threat,” Benedict said. “World leaders have failed to act… these failures in leadership endanger everyone on Earth.”

“Our message today is not one of hopelessness,” Benedict added. “But the window for action is closing rapidly… we move that clock hand today to inspire action and to help move that process along.”

She also called out the United States and Russia for “undermining” the world by continuing to modernize respective nuclear arsenals. The Doomsday Clock was launched in 1947, and nuclear weapons have plagued this project for almost its entire existence. It has been adjusted 18 times.

“[World leaders have] failed to live up to their responsibility,” Benedict said, before citing the potential for nuclear winter, worldwide famine, and “such grave destruction that we simply will no longer be able to flourish on this planet.”