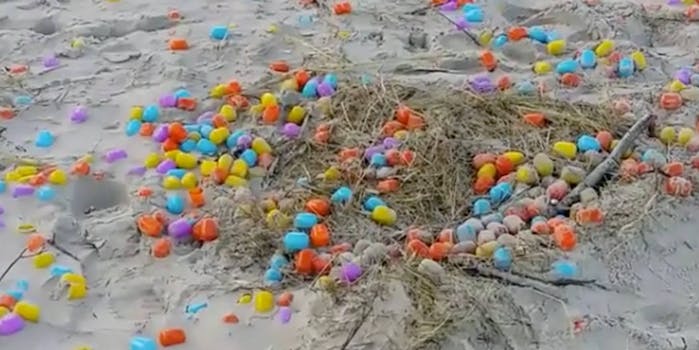 Thousands of toy eggs wash up on German beach after storm

The good folks of Langeoog got to celebrate Easter early this year.

The residents of the small, sleepy German island of Langeoog were in for a surprise on Wednesday when they found thousands of toys washed up on the beach.

A Danish freight ship carrying lost some of its cargo during Storm Axel, reported the BBC. The ship on its way back from China lost five containers in the tumultuous storm, a police spokesman from Langeoog told BILD.

The wrappers had washed off in the storm but the plastic surprise-containing eggs remained intact.

Residents of Langeoog decided to make the most of it and went on an early Easter egg hunt.

It’s unclear what company was responsible for the toys. They resemble Kinder Eggs—small plastic eggs that contain even smaller plastic toys, often themed after a film franchise such as Frozen or Minions—but a spokesperson informed the Daily Dot that “Kinder Surprise capsules have a single-piece design.”

Correction: The original version of this article misidentified the company responsible for the toys. According to a company spokesperson, the capsules involved were not manufactured by Kinder or any other Ferrero brands.