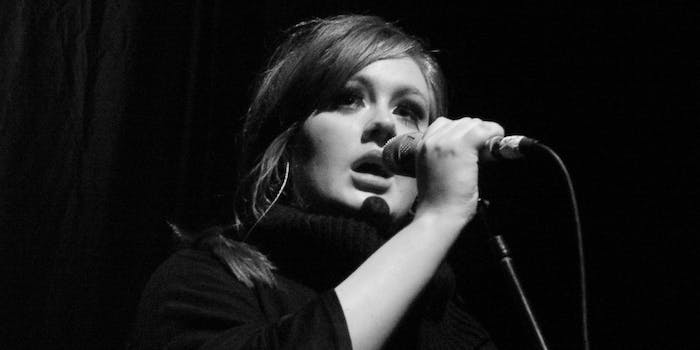 Adele’s new album speaks to the possibility of a kinder, more thoughtful Internet.

In November, Adele pulled off an enormous feat: The universally beloved pop singer sold a record-breaking 3 million copies of 25, her third LP, during its first week on iTunes in stores.

That’s 600,000 more copies than NSYNC’s No Strings Attached, the previous first-week record holder, a fact that’s incredibly impressive given the fact that hardly anyone buys albums in 2015. In addition, the first single from 25, “Hello,” has stayed No. 1 on the Hot 100 for eight weeks. Meanwhile, the music video for “Hello” has already been viewed 790 million times.

To say that Adele has broken the Internet is an understatement, but in doing so, she’s somehow managed to be free of its worst tendencies. In 2015, you can’t have the kind of massive success without also becoming a cultural lightning rod for some reason—whether it’s real or legitimate—and it’s particularly true of musicians. Critics pointed out that Meghan Trainor’s 2014 smash “All About That Bass” sold skinny-shaming as body positivity, while Robin Thicke’s “Blurred Lines” was critiqued for being a “rape culture anthem” in 2013. Those songs spent a combined 20 weeks on top the Billboard Hot 100, and all the condemnation only seemed to make them more popular.

While those examples were unique instances of feminist critics using pop culture as an important teachable moment, the problem is that the Internet has become an incredibly bad gatekeeper when it comes to outrage. It gives every criticism an equal platform, and in 2015, controversy wasn’t the byproduct of an Internet where marginalized groups have a voice and a platform they never had before. This year, controversy was the Internet, no matter how worthless or small—but Adele’s success could help save us from that anger.

Take November’s #BannerGate: Carolina Panthers quarterback Cam Newton took a Packers banner from some fans in North Carolina, folded the banner up, and then disposed of it. Reports instead suggested instead that Newton “tore it down” out of sheer maliciousness. There was also #DogInHotCarGate, in which animal rights groups chided former Flashdance actress Jennifer Beals for leaving her German Shepherd unattended while running errands in Vancouver, Canada. The only problem was that despite being summer, it actually wasn’t that hot outside; it was 73 degrees.

This year, controversy was the Internet, no matter how worthless or small—but Adele’s success could help save us from that anger.

Everything this year had a controversy—from the hullaballoo over #TheDress to the recent The Force Awakens scandal. The J.J. Abrams Star Wars reboot was taken to task by screenwriter Max Landis (American Ultra), who argued that Rey, its female lead, was a little too perfect. It’s much harder to think of controversy-free movies that came out in 2015 than ones that stirred up trouble. This year, we had #MinionsNaziGate, #FemaleWarriorGate, and #InsideOutGate. There was also #SpectreGate, when actor Daniel Craig said he’d rather “slash [his] wrists” than do another Bond film. After those comments proved controversial, he clarified: “If you’re 200 hundred yards from the end of a marathon and someone comes running up to you and says, ‘Are you gonna run another marathon?’ there’s two words you use.”

Many of these conversations are necessary and worthwhile—like the criticisms over whitewashed casting in Alex Proyas’ Gods of Egypt and Ridley Scott’s The Martian or the Jurassic World’s high-heels problem—but just as often, it’s the Internet talking to hear itself speak. While this hollow anger is seen to be a recent byproduct of the Twitter era, it’s been a staple of the Internet for at least the past decade. Back in 2007, film critic Jim Emerson tracked the “Juno backlash backlash,” in which Jason Reitman’s teen pregnancy comedy was dogpiled on for being everything from snarky and unrealistic to anti-woman.

It’s known as the “outrage cycle,” but in 2011, New York magazine’s Adam Sternbergh came up with a better term: “the undulating curve of shifting expectations.”

According to Sternbergh, you have to start out unknown but talked about by a few people (Pre-Buzz) and then you build hype (Buzz). After your movie/album/book actually comes out, you need to become a hit with audiences or critics (Rave Reviews) before you reach the inevitable peak (Saturation Point). Afterward, people will decide they didn’t like you as much as they thought (Overhyped) and that you actually suck (Backlash). Finally, a hearty group of defenders will argue that you’re still great and the haters don’t understand (Backlash to the Backlash).

What’s unusual about Adele is that she’s well past the Saturation Point—arguably ever since “Rolling in the Deep” back in 2011—but without any real controversy. Tom Waits fans accused the singer of ripping off his song “Martha,” another song about someone phoning a lost love, but the connection between the two was incredibly “flimsy,” as the Washington Post’s Soraya Nadia McDonald argued. The criticism was quickly dismissed and the non-story went away almost instantly. And a Change.org petition accusing the singer of “white privilege”—the writer alleged that 25 outsold “better” records by Beyoncé and Janet Jackson because of her skin color—was found to be a fake by Snopes.

While it might seem like a blowback is only a matter of time, LA Weekly’s Andy Hermann believes this won’t be the case. “It has… to do with Adele herself, who has, despite all of her runaway success, remained down-to-earth and relatable in a way no other pop superstar of her generation has managed,” Hermann said. “She radiates authenticity—not the self-consciously retro, capital-A ‘Authenticity’ of a Jack White, or the art-directed ‘realness’ of a Drake, but just an unassuming quality that suggests she would be exactly the same person if ‘Rolling in the Deep’ hadn’t changed her life.”

Hermann predicted that if anything could have triggered an Adele backlash, it would have been 25 itself, a solid if unspectacular record that didn’t live up to its predecessor’s soaring heights. 21, one of the defining pop albums of the decade, was a tough act to follow. When you don’t live up to the impossible standards you’ve set for yourself, it’s a golden opportunity for detractors to remind everyone that they never really liked you that much anyway. When Vampire Weekend’s sophomore record, Contra, came out in 2009, a backlash had already been brewing since their earlier, better debut. The slight dropoff in quality just lit a match to the gasoline.

I firmly believe in the value of a culture that creates a space for criticism and debate, but we need to learn to use those tools in a way that’s more discerning, one that adds value to a conversation.

But that hasn’t happened. While Vox called 25 Adele’s “least interesting album yet” and the Daily Mail reported that the record received “mixed reviews,” we’ve finally learned to let “just OK” be good enough. That achievement might not appear as remarkable as crushing the Web with the force of your enormous vocals, but it’s arguably her most important accomplishment. In the current state of the Internet, it’s rare that we ever get to like (or even dislike) something in relative peace, where we can experience a piece of art without it becoming a call for someone’s head on Twitter’s silver platter. We listened to 25, we were nice about our opinions, and then we put it away.

I firmly believe in the value of a culture that creates a space for criticism and debate, but we need to learn to use those tools in a way that’s more discerning, one that adds value to a conversation. When even as something as inane as “Too Many Cooks” can be relentlessly picked apart, it’s refreshing to be reminded of the simple pleasures of outrage-free entertainment. Adele’s post-controversy album speaks to the possibility of a kinder, more thoughtful Internet, where we save our outrage for the right target.

If 2015 was defined by pointless controversy, may 2016 be our national year of discernment.