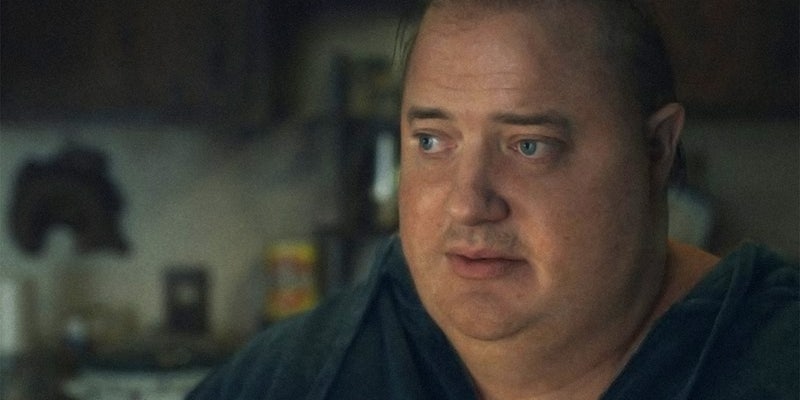 ‘The Whale’ premiere sparks a new debate about fat suits

The film stars Brendan Fraser as a 600-pound man.

The Whale, the new drama by director Darren Aronofsky starring Brendan Fraser, Sadie Sink, and Hong Chau, debuted to a rapturous reception at the Venice Film Festival over the weekend. And while we’ll have to wait for a few more months for the movie to arrive in theaters, discussion about the film—and the portrayal of its main character—is already brewing online.

Set in one location, the film, which Samuel D. Hunter adapted from his play of the same name, stars Fraser as Charlie, a 600-pound recluse English teacher who attempts to reconnect with his estranged daughter (Sink). Reviews have leaned generally positive, but so far, much of the praise has been directed toward Fraser’s performance, which is already garnering awards buzz including a potential Oscar nomination come next year. Fraser’s turn in The Whale is also being framed as a career comeback for Fraser: After starring in some of the biggest films in the ’90s and early ’00s, Fraser alleged he was essentially backlisted after he said a former president of the Hollywood Foreign Press Association groped him.

In the past few years, Fraser started regularly working again with turns in the HBO Max series Doom Patrol, the TV shows Trust and Condor, Steven Soderbergh’s No Sudden Move, and a role in Martin Scorsese’s upcoming film Killers of the Flower Moon. (He was also set to play the villain in the now-canceled Batgirl.) Fraser has plenty of goodwill these days, both from people who see Fraser as a childhood staple as well as the joy they feel from seeing his career thrive again after it had been derailed. His emotional response to being told that people were rooting for him, along with a video from the Venice premiere of The Whale where Fraser bursts into tears, makes him all the more endearing.

The level of affection people feel for Fraser finally getting another shot at stardom, for some, makes the fact that the comeback role involves heavy usage of prosthetics and a fat suit to play a 600-pound man all the more complicated.

Vanity Fair’s first look at The Whale detailed some of the steps that Fraser took to make sure that he was portraying his character, including working with the Obesity Action Coalition. The article also focuses on the sheer physical transformation Fraser took to put on to play that character, as well as the difficulties that came with it. It’s a factor that will inevitably become a big piece of Fraser’s awards season narrative.

But Aronofsky is aware of the many pitfalls that so many derided portrayals of fat characters by actors in fat suits fall into and the fatphobia surrounding using fat suits and insists that obesity is “just part of what Charlie is.” (Sarah Paulson in American Crime Story: Impeachment, Emma Thompson in Matilda the Musical, and Renée Zellweger in The Thing About Pam are only a few recent examples.)

“I looked at other body suits that had been used in comedies over the years, usually for a one-note joke,” Fraser explained. “Whether intended or not, the joke is, it defies gravity. This was not that.”

Few people have seen The Whale yet, so it’s hard to judge how successful Aronofsky and Fraser are at depicting that aspect of the character outside of those Venice reviews. But for some, having Fraser put on a fat suit for the role is in and of itself fatphobic. The film’s plot, as well as the play it’s based on, has also been called out for being fatphobic and harmful. (Charlie’s compulsive eating is related to his grief following the death of his lover.)

But unfortunately, some of the Venice reviews aren’t exactly helping matters. Several reviews went viral for the fatphobic language used to describe Charlie’s obesity with two of them (Variety and The Guardian) specifically comparing Charlie’s obesity to Jabba the Hutt.

The Whale won’t be released in theaters until Dec. 9, but with more festival premieres for the film and Fraser’s eventual awards season campaign, chances are the discussion around the film won’t be going away anytime soon.