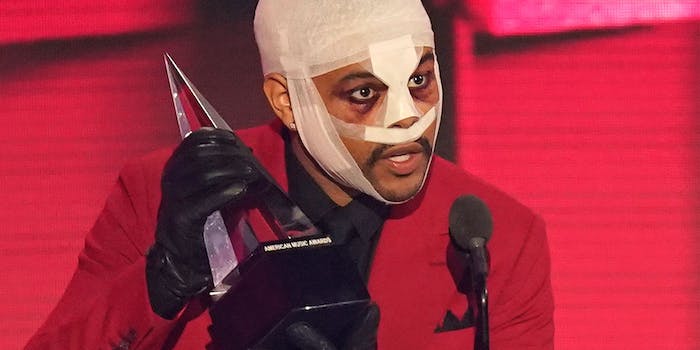 People are memeing The Weeknd’s bizarre injuries at the AMAs

The Canadian singer showed up to the AMAs with bandages covering his face.

The Weeknd found a unique way to stand out at the American Music Awards on Sunday night: He showed up with bandages all over his face. But don’t worry, he’s fine! The Canadian singer was dressed as a version of The Character, the protagonist from his latest album After Hours, which features his blood-spattered face as the cover art.

Over the past few months, The Weeknd has made several public appearances wearing fake injury makeup including black eyes and a broken nose. This stems from the idea that The Character is in the middle of a breakdown in Las Vegas, a concept that conveniently doubles as an eye-catching publicity stunt. His appearance at the AMAs was the most extreme to date, prompting plenty of memes about his mummy-like bandages.

The Weeknd picked up three awards in the soul/R&B category: favorite male artist, favorite album and favorite song, which he won for “Heartless.” And when he showed up to collect those awards, some viewers definitely didn’t know what was up with the bandages. Meanwhile The Weeknd’s longtime fans were well aware of his ongoing role as The Character, whose defining trait is a series of increasingly serious injuries. Here’s how he looked at the VMAs in September, sporting black eyes and a bruised nose:

The Character’s alarming appearance is partly intended a message about the dangers of drunk driving, the main theme of the song “Blinding Lights.” But The Weeknd’s fake injuries are also a very effective gimmick for his new album, creating a narrative around his public appearances.