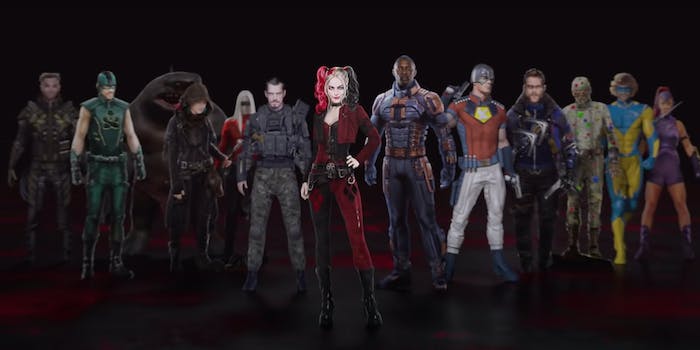 James Gunn says that Warner Bros. agreed to let him kill whomever he wanted in ‘The Suicide Squad’

No really, no one is safe.

Whenever the writer, director, or star of a major franchise tries to sell fans on the idea that “no one is safe,” many fans tend to roll their eyes. The concept of “no one is safe” rarely applies equally to its leads until the end of the series, the last movie in a franchise, or when an actor fulfills their contract. So for the most part, the emotional deaths often fall upon villains or beloved secondary characters like Guardians of the Galaxy’s Yondu. (While their deaths were emotional in execution, Iron Man and Black Widow were both protected by plot armor until well into Avengers: Endgame.) But The Suicide Squad director James Gunn insists that really, no one in The Suicide Squad is safe.

That assertion comes courtesy of Empire Magazine’s cover story on Gunn’s first foray into the DC Comics universe. In comparing the characters in Guardians of the Galaxy—his Marvel franchise—and The Suicide Squad, he explained how the dynamics between those teams differed.

“I think you know, from pretty close to the beginning, that all of the Guardians are good—apart from Nebula, who’s the outlier,” Gunn told Empire. “But in The Suicide Squad, some of the characters end up being good, some end up being terrible. They don’t just get in fights and say they’re going to kill each other, they actually do get in fights and kill each other. You really don’t know who’s going to live and who’s going to die. I was given full freedom to kill anyone—and I mean anyone—by DC.”

After sharing a link promoting Empire’s new cover with the caption, “What two characters do you think are most likely to survive” The Suicide Squad, a fan questioned the belief that anyone was up on the chopping block, pointing out that “Harley Quinn has franchise armor” and that Amanda Waller (who’s appeared in the Arrowverse, among other places) and King Shark (who is a major character in the animated Harley Quinn series) were both safe because “DC has them in other things.”

In response, Gunn reiterated the notion that no character had any armor protecting them from being killed.

“No character was protected by DC,” Gunn tweeted. “They gave me carte blanche to do what I wanted. That was one of the things we agreed to before I came to work for them. I wasn’t looking for shock value but I wanted the audience to know anything could happen.”

Right now, The Suicide Squad has four actors from the 2016 film Suicide Squad: Margot Robbie as Harley Quinn, Viola Davis as Amanda Waller, Joel Kinnaman as Rick Flag, and Jai Courtney as Captain Boomerang. Out of those four, Harley Quinn has gotten the most mileage between starring in Birds of Prey and getting her own animated show. And John Cena’s Peacemaker already has a series in the works at HBO Max, but that’s more of an origin story versus a direct sequel to The Suicide Squad.

Per Gunn’s assertion, those qualifiers or so-called protections don’t matter; Harley Quinn, Amanda Waller, Rick Flag, Captain Boomerang, King Shark, and Peacemaker are just as much at risk as characters like Polka-Dot Man, Weasel, The Thinker, and Rat Catcher 2.

We’ll have to wait until August 2021 to see how that supposed carnage plays out on the big screen, but whether or not your favorites die, Gunn is assuring us that he got to tell the story he wanted to—with as high of a body count as he wanted.