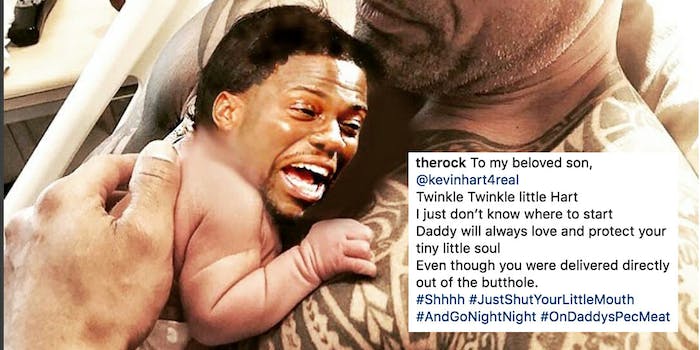 He penned a poem, too.

Dwayne “The Rock” Johnson trolled his friend and fellow actor Kevin Hart over the weekend in a mildly disturbing—but hilarious—Instagram post.

Johnson posted an image of him cradling his newborn daughter, Tiana Gia Johnson, with Hart’s head Photoshopped onto her body. He also included a poem:

“To my beloved son,

I just don’t know where to start

Daddy will always love and protect your tiny little soul

Even though you were delivered directly out of the butthole.”

To my beloved son, @kevinhart4real Twinkle Twinkle little Hart I just don’t know where to start Daddy will always love and protect your tiny little soul Even though you were delivered directly out of the butthole. #Shhhh #JustShutYourLittleMouth #AndGoNightNight #OnDaddysPecMeat

The post was made complete with the hashtags, ##Shhhh #JustShutYourLittleMouth #AndGoNightNight, and #OnDaddysPecMeat. Hart gave the photo his seal of approval by also sharing the photo on his Instagram and wrote, “the internet will forever be defeated, this is hilarious as hell.”

They grow up fast but they always be your baby. @therock @kevinhart4real pic.twitter.com/WSVM4YUJiq

The two men have starred in multiple hits together, including Jumanji: Welcome to the Jungle and Central Intelligence. They often like to poke fun at one another on the internet—but Hart’s going to have to come up with something good to get back at Johnson.