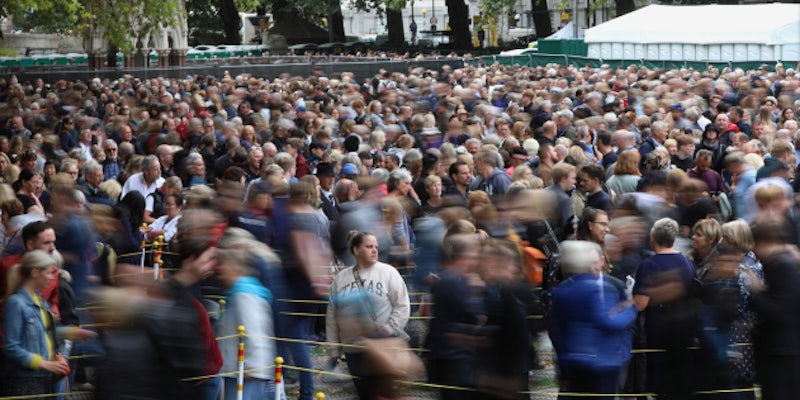 'Tell me this isn't the greatest bit of British performance art that has ever happened?'

In a feat of cartoonish, impossible to parody Britishness, the queue to see Queen Elizabeth II’s body as she lies in state is miles long—and it has its own social media accounts to allow people to monitor queueing developments in real-time.

These live updates include announcements as to where the start of the queue currently is as well as information on how to get there, because as time passes the queue grows ever longer, snaking its way across London and prompting a slew of Twitter memes about where that entry point is likely to end up.

However, with projected wait times going up to 35 hours, and some people having already waited 30 hours by camping out before the official queue time even started, some of the memes are starting to look a little too plausible.

Astounded observers, some of them British themselves, are agreed on one thing: this entire spectacle is absurdly British.

Quite a lot of people seem to be making friends and having a jolly good time in The Queue, despite the officially solemn purpose behind it.

And weirdest of all is the strange veneration for The Queue itself that’s cropping up.

All in all, it’s a fascinatingly absurd phenomenon, a piece of performative Britishness that has us observing ourselves in amusement, confusion, and not a little embarrassment.