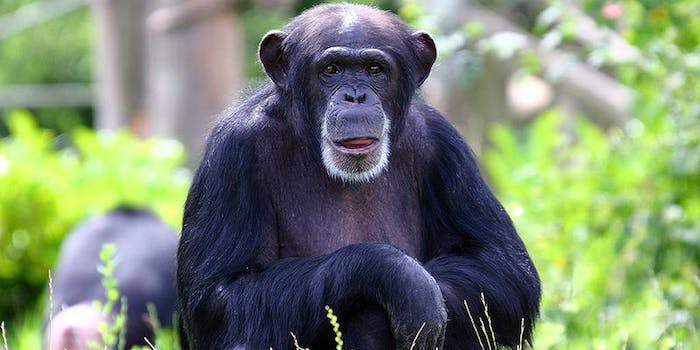 The problem with monkey personhood

Chimps deserve rights, but not just because they look and act like humans.

Can YouTube change the way we look at animals? According to Jane Goodall, the world’s leading chimpanzee researcher, the answer is yes. In a recent interview with the Dodo, Goodall credited the social media revolution for “getting people to think differently” about their relationship with the animal kingdom. This is why Goodall thinks that spreading viral videos of dogs dancing to “Turn Down for What” isn’t just cute. It’s vital to our planet’s future.

“The media is responsible in many ways for guiding what people think is important,” Goodall told the Dodo. “You can now get millions of people on a campaign just by pressing little buttons and get people to sign in and put their name out there. I think that’s why you get demonstrations of thousands of people rather than the hundreds that you might have had twenty years ago.”

Goodall’s statement on animal rights is prescient at a time when our nation’s highest courts are debating the legal dividing lines between “us” and “them,” but it’s doubtful this will spark the revolution Goodall implores. According to the Guardian, New York courts are currently debating a case that would grant the rights of personhood to chimpanzees, after a 26-year-old chimp named Tommy was found “imprisoned” in a trailer park shed.

Tommy’s lawyers are arguing that his captivity constitutes a violation of habeas corpus, defined as “an order demanding that the custodian of a prisoner prove a legally justifiable reason for detainment.” This “wrongful imprisonment” argument hinges on the definition of “personhood,” as habeas corpus is a right that has, thus far, only been extended to humans. In order to free Tommy, his lawyers must argue that he sufficiently counts as a person.

This is, of course, where things get complicated. Steven Wise is the lawyer working on the case through the Nonhuman Rights Project, a legal team working to destroy the “legal wall…erected between humans and nonhuman animals,” as Wise explained to the Guardian in an interview. Wise plans to cite decades of evidence that shows the link between humans and chimpanzees, in order to argue that chimpanzees are sufficiently “autonomous and self-determined” enough to have the “distinction” of personhood.

The existing research is certainly on Wise’s side in that regard. Primatologist Franz de Waal told the New York Times in 2007 that chimpanzee social order is markedly similar to human societies, in which members of a community know their place through entrenched hierarchical orders that dictate rules and behavioral expectations.

“[Primates] also have a sense of reciprocity and fairness,” the Times’ Nicholas Wade explained. “They remember who did them favors and who did them wrong. Chimps are more likely to share food with those who have groomed them. Capuchin monkeys show their displeasure if given a smaller reward than a partner receives for performing the same task, like a piece of cucumber instead of a grape.”

An example cited in The Week further illustrates the social and emotional complexity of chimpanzees. In a staff editorial, the magazine argued that chimps “seem capable…of recognizing feelings in other apes.” The Week continued, “When a chimp named Pansy was dying in Scotland in 2010, her family groomed and comforted her as she approached her end. After she died, her best friend Blossom sat by her lifeless body through the night.”

The issue here is not the emotional intelligence of animals, backed up by both scientific research and Goodall’s claims about the effects of social media. The question is why certain animals are conferred special privileges that may not be granted to others.

According to the New York Times Magazine, the Nonhuman Rights Project plans to lobby on behalf of “dolphins, orcas, belugas, elephants and African gray parrots—all beings with higher-order cognitive abilities.” Part of the legal appeal of chimpanzees is that they share 98.7 percent of the same DNA as humans. But genetics professor Steve Jones, a lecturer at the University of London, wonders where mice, who also have a 90 percent overlap with human DNA, would thus fall. “Should they get 90 percent of human rights?”

This line of reasoning might be used to discredit Wise’s chimp personhood argument, but it merely shows its shortcomings in terms of scope. Since the first animal cruelty laws were enacted in the early 1800s, they have remained woefully insufficient in protecting the rights of non-human persons. As Wise told The Week, they weren’t even enacted to protect animals. Wise explained, “They actually were seen as a way to protect people. They wanted to stop cruelty to animals because they believed that it led to cruelty to other human beings.”

Almost 200 years after those early ordinances, Wise and his lawyers are still using humans to determine the rights of the natural world. The idea of “personhood,” in the court’s definition, doesn’t translate to “the intrinsic right of animals based on the fact of their existence” but on how closely they resemble people, particularly how well they can be anthropomorphized. Chimps make that a simple task by looking and acting like humans, but does that make them more deserving of rights than horses or koalas?

As the Nonhuman Rights Project’s mission suggests, their greater goal is to extend the rights they hope to score for chimpanzees to more members of the animal kingdom, and on this matter, Switzerland is far ahead. Europe’s favorite wartime abstainers changed its country’s constitution to recognize the “beingness” of all non-human animals, although Wise has criticized the legislation for being “vague.” In an interview with Vice magazine, Wise asked, “Are you trying to tell me that a firefly or a beetle has a right?”

While deciding the beingness of a insect versus the family dog is a tricky legal situation for any court to take up, answering these important questions will be crucial in helping to fix our broken animal rights system. As human society grows, its impacts on the biosphere become increasingly severe.

As the Washington Post reported this September, humans have “killed roughly half of the world’s non-human vertebrate animal population since 1970.” This shift was caused by “exploitation (i.e., overfishing and overhunting) and habitat degradation,” as well as “humans’ ever-increasing footprint on planet earth.” Considering the United States’ sluggish action on climate change, underscored by widespread protests in September, as well as continuing population growth, these rates are unlikely to abate any time soon.

Jane Goodall argues that recognizing animals as a key our survival will be not only be crucial for our planet’s future but is also a key part of recognizing our own humanity. In an interview with PBS’ Nova, Goodall said, “Empathy is really important… Only when our clever brain and our human heart work together in harmony can we achieve our true potential.” If there’s one thing, thus, to be learned from YouTube, it’s not that animals are like humans. It’s that we must also see ourselves in them.

Photo via Chester Zoo/Flickr (CC BY 2.0)