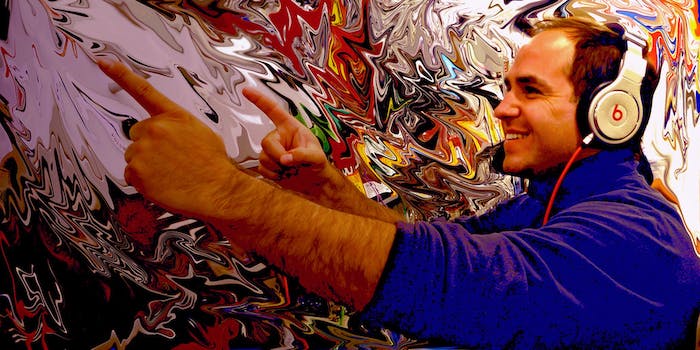 The problem with Beats by Dre

If you're listening to your $300 headphones right now, you may want to put them away.

It’s probably best to preface this piece with a warning: if you are reading it while listening to music on your Beats by Dre headphones, this is about to get uncomfortable.

A video from YouTube’s Marques Brownlee is getting a lot of attention this week, after the tech guru dropped some serious knowledge about the popular headphone brand. Laying into the popular product as diplomatically as possible, Brownlee states that,

64 percent of the expensive headphones people are buying are Beats by Dre. Clearly [their strategy] working… The more people think your product is worth, the more they’re willing to pay for it. And with the celebrities wearing them all over the place, all the time, the design, the fashion statement it makes, the premium unboxing experience, even the custom spots in stores all over the country that separate it from the rest, that’s why they’re able to charge $300 for these, when I’d be willing to bet they cost less than $150 to make… Here’s my bottom line… a $300 pair of headphones is not necessarily twice as good as a $150 pair of headphones, in fact it probably isn’t, especially of the $300 pair is spending so much on marketing and their image. So if you’re going to buy a pair of headphones, and all you care about is, not just the fashion, but the design, and the unboxing experience, and the name, and the reputation of the company, then Beats by Dre are great.

Harsh. Yet Brownlee knows what he’s talking about when he says he’s “willing to bet” that the actual value of the headphones is at odds with their price. The viral clip has over a million views, but that’s just par for the course where his channel is concerned. However, Brownlee’s not all doom and gloom—he suggests the Audio-Technica M50 as a better alternative to Beats where sound quality is concerned.

It’s true that Audio-Technicas are not quite as sexy as Beats by Dre are, but Brownlee’s complaints regarding Beats are about more than misconceptions. What the rise of Beats ultimately symbolizes is the way image is becoming the most important part of popular entertainment, especially where music is concerned.

To give credit where credit is due, the business strategy behind Beats has indeed been an inspired bit of genius. Their deal with Apple was monumentus; when your company gets acquired for $3 billion, you must be doing something right. And as Brownlee mentioned, their specific sections, particularly in Apple Stores, have literally set them apart from their competitors. It’s no wonder that 50 Cent has partnered with Intel in an attempt to emulate his former mentor in the audio game, but so far, Beats remains uniquely unmatched in the premium headphone market.

As Brownlee also mentioned, this is directly tied to Beats’ engagement with celebrities. Endorsements from upcoming hip-hop royalty like Kendrick Lamar may seem a given, but pop stars like Ed Sheeran and Ellie Goulding have hopped on the Beats bandwagon, too. And Beats presented the music video for Jessie J, Ariana Grande, and Nicki Minaj’s “Bang Bang” just last month.

However, Beats’ celebrity endorsements also go beyond music. While recording artists are certainly the most natural candidates to endorse their products, plenty of athletes have done Beats promotional spots, too.

Of course, celebrity products and endorsements are usually a dubious trade at best. Dre might be the exception, in that his product is actually related to what he’s famous for (would anybody have predicted that world champion boxer George Foreman would eventually become known for selling grills?), but most stars who hawk stuff don’t have any stake in what they’re hawking. To illustrate this, The Verge ran an expose of sorts in 2012 about celebs who have done cell phone commercials for phones they don’t use in real life, and for a bonus piece of irony, here’s a picture of Dr. Dre wearing a pair of Audio-Technicas.

However, Dre isn’t really applicable here, because he does have a major stake in Beats. (After all, his name is in the title.) His net worth after the Apple sale? $800 million, making him the richest rapper in the world. One could argue that Dre is the product. It’s not dissimilar to the Jordan brand at Nike. You have a legend in their field, who puts their name on something directly related to said field. Then, you get other celebrities in that field (or vaguely related arenas) to shill for your product too. Charles Barkley even got his own Nike shoe based off Michael Jordan’s success, which begs the question, how long will it be before we see the special line of Beats by Eminem?

Yet the irony here is that the closer Dre is connected to Beats, the less the company is based on his ability as a musician. Because like the Air Jordan brand, Beats are as much about buying something that’s cool as they are about buying something that’s functional (which isn’t to say the Air Jordan line of basketball shoes aren’t very good—they are.)

Like many celebrity products, it’s all to to do with the idea of being famous. This is a common thread in everything from Air Jordans to Tom Hanks’ new typewriter app. What’s being sold isn’t the product, it’s the person behind the product (and to be fair, this happens to work especially well if the person is as well-liked as Hanks is). Or in some cases, it’s what that person represents. Beats by Dre represents the idea that you can listen to music the same way your favorite artists do. On the other hand, lifestyle websites like Gwyneth Paltrow’s Goop and Blake Lively’s Preserve represent the idea that you can live like a movie star—even if you aren’t rich and famous.

The conundrum that arises from this where music is concerned is that looking like a musician actually has nothing to do with music. This ostensibly makes Beats another lifestyle brand, in that as headphones, their look trumps their sonic quality.

According to some, this is exactly what’s wrong with modern music; the record business is all about the shiny spectacle going on around the music, but has nothing to do with the music itself. Ted Gioia at The Daily Beast  caused a stir for essentially saying as much in March, when he declared that music writing has turned into lifestyle writing.

Technical knowledge of the art form has disappeared from its discourse. In short, music criticism has turned into lifestyle reporting… When Harry Connick, Jr. recently used the word ‘pentatonic‘ on American Idol, his fellow judge Jennifer Lopez turned it into a joke. And, indeed, what could be more humorous than a musician of Connick’s stature trying to talk about musical scales on a TV reality show? Yet football announcers not only talk about ‘stunts’ or the ‘triple option’ but are expected to explain these technical aspects of the game to the unenlightened… In my many years as music scribe, I’ve never encountered such a huge gap between the skilled and the unskilled, the talented and the wannabes.

But critics aren’t the only group one can level this argument against. Consumers who would rather look the part of the audiophile than take the time to participate in active listening are possible culprits in this as well. Again, this is the primary malfunction with Beats—that they are marketed more for individuals who want to look like music-lovers, instead of people who really spend time listening to music. A perfect summation of this divide may have been the Jimmy Kimmel segment, wherein he asked attendees at SXSW what they thought of fake bands, and got responses from all of them, apparently too afraid to look out of the loop.

With all that on the table though, it would still make you look like an asshole if you went around judging people with Beats by Dre. Whatever your definition of a poser is, it isn’t nearly as annoying as listening to someone who thinks they know everything shout “POSER!” at other people. And besides, image is an important part of modern music. Even curmudgeonly old Gioia admits, “Certainly non-musical factors also deserve attention from critics… who knows, maybe waving a foam finger or dressing like a robot warrants a paragraph or two, even if it’s little more than a gimmick.

To go back to Brownlee’s initial review, the main thing with Beats is to know what you’re getting before you go in. They might be tantamount to a lifestyle choice, but there’s nothing wrong with trying to look cool. Advanced audiophiles know they can do better, but for the rest of us, choosing between pretty colors holds its own appeal.

Photo via gonzalo baeza/Flickr (CC BY 2.0)