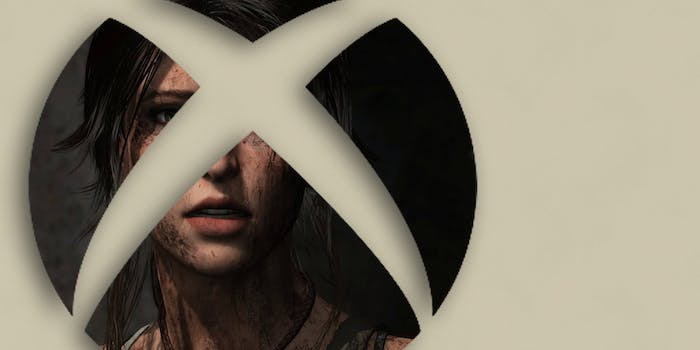 In an industry where female protagonists in video games are few and far between, Tomb Raider star Lara Croft looms large.

During Microsoft’s press conference on Tuesday from Gamescom 2014, it was revealed that Rise of the Tomb Raider will be an “Xbox exclusive.” It was a horribly phrased announcement. No one knew whether or not the game would be offered on just the Xbox One, or also on the Xbox 360, or if this was only a timed exclusive, meaning that Rise of the Tomb Raider would eventually be offered on other platforms.

Yesterday it was reported that Phil Spencer, head of the Xbox division at Microsoft, confirmed in an interview with Eurogamer that Rise of the Tomb Raider will be on the Xbox 360—and that it is a timed exclusive. This has become yet another PR gaffe, the likes of which have plagued Microsoft since they revealed the Xbox One in May 2013 as a multimedia center first and foremost versus a video game system, much to the ire of gamers.

Learning that Rise of the Tomb Raider is not actually an exclusive for Xbox may have alleviated some consumer concerns, but it does little to alleviate cultural concerns regarding lack of access to one of the most iconic female characters in video game history.

Console exclusivity sucks for consumers. If Titanfall or Halo are the only Xbox games you care about, or if you’re only interested in a PlayStation for The Last Of Us or the next game, you have to decide whether or not it’s worth spending hundreds of dollars to play only those games.

This is how the video game business has done things since the days of the Atari 2600 and the Intellivision, however, and core gamers especially have learned to just pony up and buy Microsoft’s, Sony’s, and Nintendo’s consoles in any given generation if they want to play everything.

And as the OP in this NeoGAF thread rightly points out, the money garnered from exclusivity deals can make all the difference for a video game studio’s ability to develop games, period.

In an industry where female protagonists in video games are few and far between, Tomb Raider franchise star Lara Croft looms large. The original Tomb Raider in 1996 introduced Croft as an English archaeologist modeled in the vein of Indiana Jones, packing a pair of pistols and seeking ancient treasures. And for 14 years and over three console generations, Croft returned in sequel after sequel.

Lara Croft wasn’t entirely a positive figure for women. She was hyper-sexualized with huge breasts and really short shorts. You will find as much criticism as praise for Lara Croft in feminist circles. What was probably most important, however, is that she was around to be debated over at all. Women simply do not serve as the stars in video games all that often.

Conventional wisdom is that video games with strong female protagonists will not sell to boys. If anyone has definitive, concrete information to validate the argument, however, either they’re not sharing or I’ve somehow managed to miss it all these years. I hear anecdotes about how video game covers with only men test better than versions of those covers with a man and a woman, but that’s about it.

This conventional wisdom goes unchallenged year after year, and no one seems to know what’s required to dismiss it. BioWare writer David Gaider neatly conveyed the problem in this interview with Rock, Paper, Shotgun published in March 2013.

“To say that about female protagonists—that they just don’t sell [is myopic],” Gaider said. “Over the last 10 years, how many titles have had female protagonists? And we’re supposed to accept, from those particular titles, that a) that constitutes a pattern, and b) the only reason those games were unsuccessful is because they had female protagonists? That is a real leap of logic. What it is, it’s just that accepted industry wisdom is often deciding that the reasons these things happen are because we’ve already come to an assumption and we’re trying to justify that assumption.”

In 2013, publisher Square Enix and developer Crystal Dynamics took Tomb Raider in a different direction. They rebooted the franchise by harkening back to the days before Lara Croft became the gun-toting Indiana Jones-like action hero. The story written in part by Rhianna Pratchett depicted Lara as a shipwrecked archeology student who is forced to learn how to defend herself over the course of the adventure that unfolds.

The new Tomb Raider got off to a rocky start with a reveal trailer that some commentators thought was too sexualized and a misunderstanding about whether or not Croft would be portrayed as a potential rape victim during the game. That turned out to be untrue, and when the game was finally released, gone were the huge bosoms and the short shorts. Lara Croft was characterized with more depth than in any previous Tomb Raider installment.

Some critics took issue with the fact that Lara was depicted as a non-violent character who was forced to kill over and over again by the game mechanics. What these critics were ultimately observing was the recognition that Crystal Dynamics had taken steps to transform Lara Croft into a more fully realized character, and these critics wanted even more of that.

In an industry where female protagonists were rare, women gamers who rarely saw their gender portrayed as anything other than a hostage or background decoration had a real character they could relate to, even if the rebooted Lara Croft wasn’t perfect.

The new Tomb Raider sold a million copies in less than two days after it was released on March 5, 2013. It sold 3.4 million copies in total that month, coming in second only to BioShock Infinite, which was a monster of a release. According to a story published on Gamesindustry.biz on May 28, 2013, however, publisher Square Enix was not happy with the number of Tomb Raider units sold through to customers.

Regardless of how Square Enix felt about the performance of the rebooted Tomb Raider, Microsoft has enough faith in the franchise to secure the sequel as a timed Xbox exclusive. As a result, Lara Croft and her continuing adventures have just been put out of the hands of any gamer who doesn’t own an Xbox brand console, for as long as the exclusivity contract lasts.

The rebooted, more fully realized Lara Croft will not appear on the PlayStation 4, the most popular eighth generation video game console currently on the market, for an unknown amount of time. The PC gamers who eschew console gaming and are very unlikely to buy an Xbox for Rise of the Tomb Raider are also out of luck until the contract expires.

Lack of access is a problem in and of itself, and a problem serious enough that Change.org put up a petition for Crystal Dynamics and Square Enix to rescind the Xbox exclusivity agreement for Rise of the Tomb Raider the very day it was announced.

There’s also the consideration of that conventional wisdom regarding strong female protagonists, which may be a much larger problem.

Square Enix wasn’t happy with Tomb Raider sales when it was offered on every major platform. Tomb Raider may not be a franchise strong enough alone to warrant the sale of Xbox One consoles. By the time Rise of the Tomb Raider is released in the holiday season of 2015, the Xbox 360 will have been an old console for over two years, which will have an effect on sales for that version of the game. The further we get into the life cycle of a new console, the more likely gamers are to eschew games on the old console.

If Rise of the Tomb Raider fails to perform to Square Enix’s sales expectations, will this be taken as an argument to bolster the conventional wisdom that games with female protagonists don’t sell? It is not hyperbole to suggest that the situation with female protagonists in video games is tenuous enough that this result could hold back efforts to increase representation of women in video games for years to come.

I asked a PR rep for Square Enix for comment about whether Crystal Dynamics had considered the cultural issues relevant to this exclusivity deal. I was pointed at this statement issued yesterday by Darrell Gallagher, Crystal Dynamics Head of Studios.

Even if Crystal Dynamics and Square Enix and Microsoft perfectly understand the cultural relevance of Lara Croft and Tomb Raider, companies tend not to operate on cultural considerations. Square Enix and Microsoft would never have struck this deal were it not in their economic best interests, which trumps the other angles. To be fair, Microsoft spending its own money to market Rise of the Tomb Raider could help with the final sales numbers.

That, in essence, is the bet, because sales of an video game usually plateau very quickly after the game’s launch, usually measured in a time scale of weeks. New games build up to a marketing crescendo just before release and then can vanish from conversation with shocking speed, because another upcoming game has begun to dominate Web pages with its marketing campaign.

Not only do gamers tend to eschew games on old consoles the further we get into the life cycle of a new console, we also know that gamers have short attention spans. Release day hype drives sales, and the further away gamers get from that hype circus, the less likely they are to pay a premium for a game.

Gamers are more likely to wait until they’ve run out of anything else to play, and/or when the price for a game has dropped, like Steam sales on PC when games are offered practically for pennies.

By the time Rise of the Tomb Raider is finally available on other consoles besides the Xbox brand, Square Enix may already have adjudicated on the sales numbers. And that perception will guide their decision as to whether or not it’s worth bothering to develop another game in the more-serious tone of the rebooted franchise, versus the puzzle games like Lara Croft and the Temple of Light.