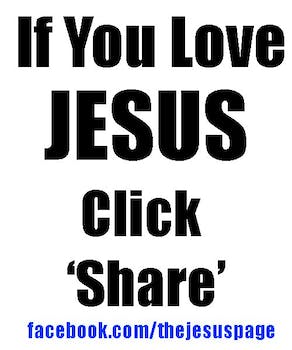 Faith in The Jesus Page can lead to unintended consequences

Some Christians on Facebook are giving a prayer with their share–and in the process, they’re inadvertently advertising for a seemingly-shady company.

The Facebook group The Jesus Page has garnered more than 330,000 likes since starting in December 2011. It seems many of its users have clicked “like” on the group to express their faith, unaware that doing so endorses a group that frequently links to a company that calls itself “US.HealthCare.Affordable-Health-Rates.com.”

The Jesus Page shares images of short, Christian-themed messages, like “If You Love Jesus, Click Share”—with, cynical captions like “If you make less than $50k/year, you may qualify for reduced health insurance… as low as $39/month! Enter your zip code here to see if you qualify: http://bit.ly/HealthCareApplication.” That photo alone was shared almost 3,000 times.

US.HealthCare.Affordable-Health-Rates.com—that’s the stated name of the company—doesn’t have much buzz on the Internet, and did not return a request for comment. In fact, the limited commentary on the company available from a Google search indicates it’s a scam.

Commenters on mrnumber.com, a site used to report on phone numbers used by Robocallers, complained about getting flooded with automated phone calls after signing up for an insurance quote from the service.

“We applied for what we THOUGHT was Medicade online. We got 5 calls immediately, then over the next few weeks (it’s been 3 or 4 weeks since) we get calls every other day or so. This is one,” wrote the user Lauran.

“I was searching for health insurance filled out a form and received several phone calls after submitting the form,” wrote commenter A Web User. “Here is the link http://us.healthcare.affordable-health-rates.com.”

Later, A Web User reported back that he couldn’t stop receiving automated calls: “I say report these people to the FTC as I have worked as a telemarketing operations specialist working with the dialer and knowing how these laws are. Calling that many times in that short amount of time is ILLEGAL.”

Remarkably, The Jesus Page isn’t the only Christian-themed Facebook page that repeatedly links to US.HealthCare.Affordable-Health-Rates.com. Jesus Is My Savior, with 83,000 likes, runs a similar game.

Above the statement “Worry not, for Jesus’s love is eternal,” the group writes: “Americans making less than $50k per year may qualify for reduced health insurance, as low as $39/month. Enter your zip code here.”