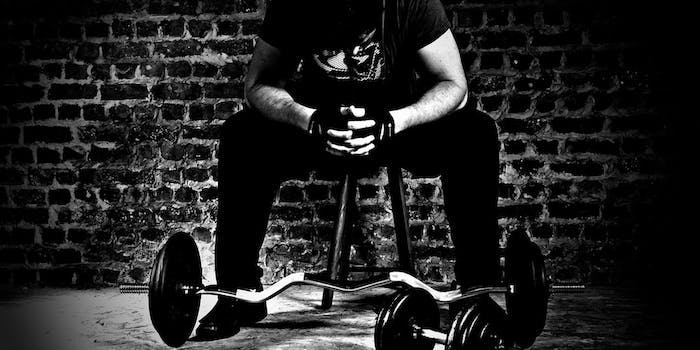 The Internet has a testosterone addiction

Why do so many men need to feel more masculine?

You might think when I say the Internet has a testosterone problem that I mean the malignant attitudes of MRA trolls that often dominate comment sections. I might also mean all those anonymous, sexist, homophobic hate-mongers that violently harass people on social media feeds and timelines. Plus, let’s not leave out the news about one of the Steubenville rapists being allowed to rejoin his football team in time for the new season. That’s another rock solid example of problematic testosterone.

But in this instance, I don’t use the word figuratively. I mean it, quite literally. The Internet has a hormone problem—namely, black market testosterone.

American men buy so much testosterone online that the mainstream media finally started to pay attention. Time magazine even did a cover story on it. They called it “Manopause.” (Isn’t that cute?) Despite the media’s tendency to brand a serious issue with a sound-bite label, it’s still a very important question. It’s one the mainstream media should consider, in-depth: Why do so many million American men have a strong need to feel “more manly?”

If you could boil manliness down to its essence, reduce it down to its chemical base, most dudes would say that what you’d be left with is testosterone. (Some “misandrists” would say it would be male tears—but they’re kidding.) Testosterone is commonly considered a synonym for masculinity. (Like, if the patriarchy were a single person, testosterone would flow in his veins.)

For the last few days, I asked every man I met or crossed paths with the same question: What do you think of when I say “testosterone?” Their answers varied little: Strong. Powerful. Masculine. Dominant. Man. One dude called testosterone “man juice.”

But there’s the rub: it doesn’t work like that. Humans are not divided by a chemical binary. We like to think women are estrogen and men are testosterone. They’re not. Women produce testosterone and men produce estrogen. Science insists that testosterone is not uniquely masculine. It’s just a hormone. Of course, that’s not how most men see it. To them, testosterone is the essence of man.

If you never had to sit through a television ad for Low T—it’s not an exhaust system for muscle cars, it’s a term for low testosterone: Low T is an invented medical condition that plagues middle-aged men who have more money than common sense. It acts on their deeply embedded patriarchal values. The chief symptom is a generalized sense of fear and a lack of feelings of dominance. (Or at least that’s how it’s sold.)

It all started when Solvay, a Belgian drug-maker, created a new product. It was a testosterone replacement therapy treatment called AndroGel. Only trouble for the drug-maker: the market for their new product was tiny. (Like, smaller than Belgium.) In the whole wide world, if you add them all up, there aren’t that many men who suffer from hypogonadism. Or at least, there weren’t, until recently.

After the Belgian drug-maker got their new drug approved by the FDA, they looked around and saw there was no one to buy it. How could they expand their market? Well, apparently, some genius realized what they had on their hands. “Wait, hold up! The geeks in the labcoats created scientific man-juice. Put that on the label.”

The drug-makers saw dollar signs. They hired advertisers who aimed their sales pitch at middle-aged men who felt “sluggish” and wanted to be feel “more vigorous.” Ads claimed that 90 percent of affected men didn’t even know they had Low T. That’s how you plant the seed of doubt. Fear is the greatest driver of sales. Do I have Low T? Is that me? Is that why I don’t feel so dominant? Would that make me feel “more manly?”

Do you think their fear-based pitch increased their market? You better believe it did.

In the first year, 1.3 million prescriptions were written, and eight years later, the two leading drug-makers combined for annual sales that sucked 2.5 billion dollars out of their customer’s wallets and health plans’ purchasing funds. Yes, that’s billion with a “b.” Last year, drug companies made all those billions of dollars, selling the promise of “manhood in a gel” (cream, or injection). And the companies don’t seem particularly bothered that vast amounts of their product sales occur online—on websites like roidsking.com—without the oversight of a medical professional.

The trouble with this “man-juice” is simple: we don’t know if the new drugs are safe, and all early signs and studies suggest otherwise. The New England Journal of Medicine and British Medical Journal have both offered their esteemed opinions, calling the supplements “unnecessary,” and the American Urological Association added testosterone drugs to their list of unsafe treatments and medicines. So…there’s that.

Of course, the Internet offers the full gamut of opinions. Like, you can still find plenty of doctors who will swear on a stack of bibles and medical textbooks that testosterone therapy is safe. But what we have yet to mention are all the side effects. There are the big ones, like, the increased risk of stroke, cardiac event, or sudden death (which the drug-makers mention in their TV ads). And then there are the fun ones that occur when the steroid gels and creams are accidentally transferred to others. (You really don’t want that.)

Like, for instance, if a woman comes in contact with the steroid cream/gel, her menstrual cycle can be interrupted, her voice might deepen, and she could grow hair on her face. Children who were exposed to the drugs also grew extra body hair, they exhibited aggressive behavior, and they sometimes entered puberty early. Most notably, their genitalia enlarged. Even though the drug companies mention all of this—still millions of American men think it’s worth these risks to feel more masculine. Why?

Advertising. It’s always advertising. When they wanted to sell testosterone, the advertisers decided to use tactics against men the same way they sell nearly every product to women—they lied to them and manipulated them with fear and desire. The leverage they used with men was the easily-manipulated handle of toxic masculinity. All the advertisers had to ask in subtext: Would you like to feel “more manly?”

The phrase means nothing. And yet, it means everything. It is the root of a poisonous attitude. And it is destroying us—on many fronts. Low-T and “manopause” are not global issues, but they are symptoms of our times, proof that our male supremacist culture shapes our lives, right down to our medical choices. Ill-gotten gains and dreams of domination are what push men to illegally purchase testosterone from black market Canadian drug websites. Just the same as how male supremacy is the base motivation for the misogynistic worldview of MRAs. People fall for both because they’re easily emotionally manipulated because they are in search of a feeling; they want to feel like a man.

But that search is our problem. Both the text and the subtext are poisoned.

Reflect for a second: What do you (or anyone) mean when you say “manliness?”

To you, who is “more manly”: the hard-charging bond trader who spends his days building wealth by depriving people of their homes due to adjustable rate mortgages, or the stay-at-home dad who’s in the park in the middle of the day, caring for his infant children while his wife works?

One of them is called a successful man. The other is a feminized mass of male body parts that we wonder what he’s doing with his life. But think of it this way, the stay-at-home dad fulfilled his biological imperative, and now he’s tending his children. He’s restoring our community. That’s what he’s doing.

Men don’t care—men dominate. This is and has been the underlying message of our culture. This attitude is our doom. We need to redefine masculinity not sell it online to scared men for a profit.

Pretty much, the poster boys for male fear and dreams of domination are MRA activists. Their worldview is comprised of fantasies of the past, stitched together with a thread of bitterness. However, they are not the enemy—their limited mindset is. Just like how MRAs fight tooth-and-nail online to cling to their moribund modes of masculinity (and risk their mental health in the exchange), millions of men in real life clutch at similar straws of the past, such as their fading youth, and those men who risk their health and the health of those around them do so because their hopes and dreams, the cessation of their fear, is more important to them than others. The good news is we’re ditching our old ways and gender divides with the same speed hipsters buy-up the used clothing of our discarded masculinity down at the thrift store.

When we equate testosterone with manliness, it’s not only scientifically inaccurate but, more importantly, it reinforces a dangerous gender binary that we need to overcome if we have any plans to exist on this planet for much longer. If you pay attention, you will see it writ large on the bathroom walls of the Internet (you know, Twitter): Men must change for the world to change.

Zaron Burnett III is a social commentator and humorous essayist. He lives in Los Angeles.