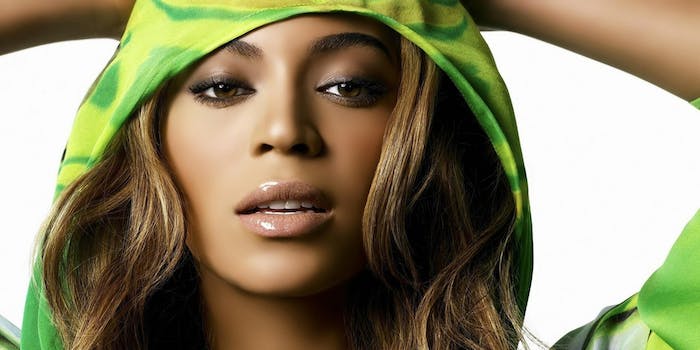 The dark side of the Internet’s Beyoncé obsession

Is the Internet's love of Beyoncé bad for everyone?

It’s Thursday, so that must mean it’s time for a new batch of Beyoncé rumors (although lately, everyday is a day for Beyoncé rumors.)

The current strain of gossip, regarding a much-discussed divorce from her husband, Jay-Z, continues to intensify, as she went to her money manager this week, and everybody lost their minds. Are they working on a settlement, splitting up assets, buying an alpaca farm—just what’s going on? Ever since Elevatorgate, the speculation has been ceaseless. It’s almost as if each time one development subsides, another takes shape.

That the search for details about Beyoncé’s personal life is so pervasive isn’t completely strange, considering that she’s one of the most famous and powerful people in the world. This year, she not only made the TIME 100, the singer graced the magazine’s cover too.

And it’s safe to say that the Internet’s love for Beyoncé is well beyond the point of obsession. The number of BuzzFeed lists that essentially amount to “X Amount of Reasons Beyoncé is Awesome” include over a dozen from this summer alone, with entries such as “The 31 Realest Things The Beyhive Has Every Said,”  “17 Times Beyoncé  Had The Answer To Everything,”  “11 of Beyoncé ‘s Most Flawless Costumes From Her ‘On The Run’ Tour,” as well as many, many, many, many more. BuzzFeed staff writer Matt Bellassai’s mini-bio for the site actually reads, “Full-time Beyoncé.” Increasingly, it feels like we live in a world where if you’re not a Bey fan, there’s something very wrong with you.

Yet it still feels like the amount of rumors swirling around a completely unconfirmed breakup between Mrs. Knowles-Carter and her husband are out of control, especially as they relate to the focus on Beyoncé. Jay-Z hasn’t received the same kind of scrutiny amidst the whole pandemonium, though if you look certain evidence, his music is potentially more popular than hers (and he made the cover of the TIME 100, too, in 2013.)

Somehow, the idea that Beyoncé is a kind of celestial, otherworldly being appears to be hurting her in all of this. Or perhaps, to put it more accurately, even if Beyoncé is not hurt personally by this mess, it’s hard not to see the effects of these rumors as indecent. After all, she may be looked at as a Queen, a King, or a flat-out deity, but that doesn’t exempt us from examining what we’re really doing by putting her under such a giant microscope.

For one thing, “Beyoncé” as talking point has almost reached so severe a level of saturation, that it’s basically impossible to hear about her doing something “cool” without immediately hearing a critique of said cool occurrence. Earlier this summer, for instance, Beyoncé instagrammed a picture of herself as “Rosie the Riveter,” which was shortly thereafter met with criticism for her decision to embody a symbol that many feel doesn’t live up to its feminist status.

Using celebrities to introduce a discussion around larger social issues isn’t a bad thing. But Beyoncé does seem to be held to a higher standard than other pop stars and actresses.

After seeing Beyoncé and Jay-Z’s “On The Run Tour,” BuzzFeed’s Aylin Zafar, Heben Nigatu, Jessica Misener, and Joanna Borns conducted a roundtable discussion that touched on why a certain preciousness surrounds the singer’s image and what that means to them. Zafar echoed many people’s sentiments in terms of her desire to see the couple’s once thought to be perfect marriage last. “I just can’t bring myself to believe that either of them would cheat on each other, and I know that’s probably naive of me,” Zafar admits. “But I’ve bought into this image and this dream they’re selling.”

Misener, on the other hand, was more pragmatic, chiming in, “Working in media has made me extremely cynical about celebrity culture, because you get a glimpse of how celebs have full-time staffs devoted to engineering their personas so that you spend as much money as possible going to their movies and paying for their concerts.”

But all four women expressed at least a small amount of kinship with the singer. For Nigatu, this stemmed from her own personal experiences. Towards the end of the summit, she recalled how Beyoncé helped her through a specific time in her life, “When I was unemployed/nannying/hustling, I used to play ‘Diva’ every morning and ‘I Was Here’ at the end of every single day. Every. Single. Day. Beyoncé is the light, the truth, and the way, y’all. Now I play ‘Flawless’ every morning #thecomeup.”

However, there was also a consensus among the panel that despite having connections to Beyoncé, there’s something untouchable about her, too. While to say she isn’t only “not like us,” but that she’s a flat out “cyborg,” as NPR’s Rachel Kaadzi Ghansah did earlier this year, is a bit extreme, Beyoncé’s holy status is a key element of her place in modern culture. An HBO documentary that aired in February of 2013 (which she directed, no less), called Life Is But a Dream, presented itself as an intimate look at the singer’s “real life,” but in some ways only made her seem more perfect.

This presents a frustrating challenge when talking about Beyoncé, because you’re no longer merely talking about her, or her music, but about everything she represents.

A good example of this is the debate that’s sprung up over where Beyoncé stands in the world of feminism. A 2013 post by Anne Helen Petersen on her blog, Celebrity Gossip, Academic Style, conveyed concern that Beyoncé’s sexualized image was fundamentally filtered through the male gaze, and that titling her last go around the world the “Mrs. Carter” tour only reinforced that. This prompted Tamara Winfrey Harris of Bitch Magazine to respond with the assertion that Beyoncé’s race makes such claims a double standard. Harris wrote, “Black women (and girls) have also historically battled the stereotype of innate and uncontrolled lasciviousness, which may explain why Beyoncé’s sexuality is viewed differently from that of white artists like Madonna, who is lauded for performing in very similar ways.”

Harris hits at a hard truth with this thesis. The controversy over Willow Smith’s Instagram and Bill O’Reilly’s ongoing caterwauling about Beyoncé herself are proof of this.

Tamara Winfrey Harris ends her piece by stating, “The conversation surrounding Beyoncé feels like assessing a prize thoroughbred rather than observing a human woman, and it is dismaying when so-called feminist discourse contributes to that. Feminism is about challenging structural inequalities in society, but the criticism of Beyoncé as a feminist figure smacks of hating the player and ignoring the game, to twist an old phrase.”

As mentioned above, it’s a good thing when writers like Peterson and Harris use pop culture to speak out about issues like feminism, no matter how they feel. But the unfortunate part of what Peterson and Harris have discovered here is the downside of when feminist icons and a culture dominated by the male gaze intersect—particularly, as in the case of Beyoncé, when you’re talking about someone who seemingly has to mean everything to everyone.

We live in a society, and more than that, a world, where the treatment of women as objects has become commonplace. Vocativ did a video experiment last month that revealed how depressingly ordinary street harassment is in everyday life. This behavior is only amplified by the Internet, where misogynistic tendencies live in full view. And while we probably don’t think about how much of this is ingrained in celebrity culture, the fetishization of women for male pleasure is almost always on display there, too.

It should be clear that these are all variations on a theme: some women do things that make them deserve harassment. Women should take it as a compliment that men violate their space and their sense of safety and privacy. Women may say that harassment feels violating—but deep down they like it. Women shouldn’t let the harassment get to them; it’s just a part of life. They don’t know how good they have it.

There are differences, of course. Photos of celebrity women produce money and fame for the photographer, whereas a guy who gets off on sexually harassing ordinary women on the street gets only his own twisted satisfaction. But in both cases, both the harassment and the subsequent justifications for it stem from the fact that women and their bodies are still seen by many people and in many cases as commodities.

On top of that, the “women as commodities” mentality becomes all the more problematic when you bring race into the equation. That so many white Americans act as if they can claim ownership over black celebrities is more than disturbing, it’s scary.

That notwithstanding, no one wants to feel bad for celebrities. When one hears someone like Kanye West advocating “equal rights” for famous people, eye rolls are sure to be induced. But there’s a line between gossiping about someone’s relationship and harassing them over divorce rumors. If we really want to keep kneeling at the altar of Queen Bey, it’s important to consider whether our offerings consist of respectful praise or invasive surveillance.