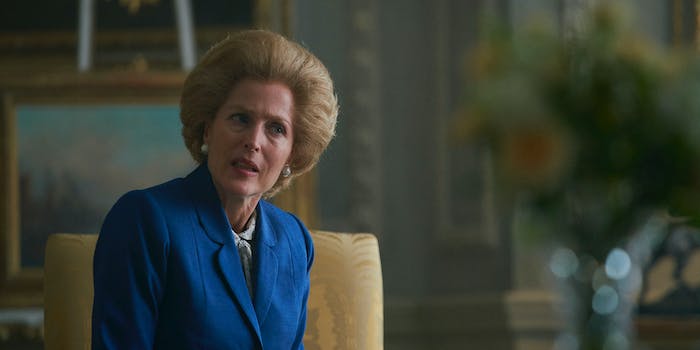 Everyone has thoughts about Gillian Anderson’s ‘The Crown’ performance

The Crown’s fourth season is finally streaming on Netflix, and fans are already sinking their teeth into the latest depiction of the Royal Family as it heads into the 1980s. And while viewers are shown just how horrible the Royal Family was to Princess Diana, it also gives a very complicated view of Queen Elizabeth II’s relationship with a most controversial figure.

The biggest casting announcement for The Crown’s fourth season was easily Gillian Anderson as Margaret Thatcher, the U.K.’s first female prime minister. Even if you didn’t know the frosty history between Elizabeth and Thatcher, the possibility of watching Olivia Colman and Anderson go toe-to-toe in a scene was thrilling.

Thatcher’s reign as prime minister and her more austere policies were controversial. She was particularly reviled in Northern Ireland and Scotland during her time as prime minister, and when Thatcher died in 2013, people took to the streets to dance and celebrate. (If you want to see how much people hate Thatcher to this day, look no further than the viral clip of a Scottish woman who said she wished she could “put a stake through her heart and garlic around her neck to make sure she never came back” in an interview that took place at the same time as Thatcher’s funeral.)

The biggest fear among Thatcher’s biggest critics was that Anderson’s portrayal of Thatcher would humanize a woman whose policies were incredibly inhumane for so many of the people they affected. Another? That some fans would start stanning Thatcher simply because Anderson (who already has a sizable fanbase) played her. It’s a similar question that Mrs. America faced as it centered around the anti-feminist activist Phyllis Schlafly.

A video highlighting some of Thatcher’s anti-LGBTQ+ thoughts sought to turn people away from potentially becoming Thatcher fans simply from Anderson’s portrayal of her.

Does The Crown garner some sympathy for Thatcher? Sure, and there is even a bit of Schadenfreude as Thatcher tries to verbally take the Royal Family (who aren’t exactly great people, either) down a notch.

For the most part, they’re enjoying how much The Crown and Anderson both seem to enjoy antagonizing or humiliating Thatcher.

But many fans are simply in awe of Anderson, who absolutely disappears into the role and almost makes you forget that someone as beloved as Anderson is playing someone as hated as Thatcher.

The entirely of The Crown’s fourth season is streaming on Netflix.