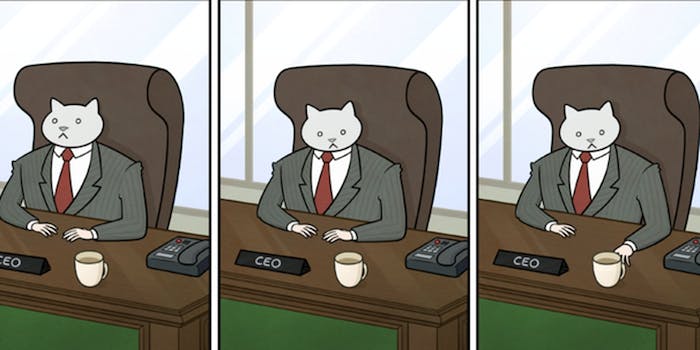 All about the astounding career of Business Cat

Get back to work.

But out of all the cat content we consume on the web, The Adventures of Business Cat—second perhaps to only Grumpy Cat—is perhaps the most consistently amusing and beloved.

Business Cat is an average house cat who wound up in charge of a multibillion dollar company, and his random adventures have been brought to glorious life in a webcomic by Tom Fodder and Rachael Robins. We recently got a chance to chat with Fodder about all things Business Cat in order to learn what makes a cat with a human body tick.

OK, so cats are clearly Internet gold, and Business Cat is probably second to only Grumpy Cat in terms of Internet love. How did you come up with the idea?

Although I’m sure a lot of people probably think it was based on the Internet meme of the same name, it actually started because of a dumb strip in my previous webcomic, Happy Jar. I was stuck for something to put up that day and so I forced my partner [Robins] to come up with one on the spot. I’d done this before and knew full well that it almost never produces anything worth turning into a comic, as her idea will usually be based around whatever catches her eye in the room at the time. More often than not, our cat, Curzon. I pressed her for panel one, and sure enough, she responded, “There’s a cat. He’s sleeping.”

“He’s dreaming about something.”

“Panel three. What’s he dreaming about?”

And without hesitating she just blurted out “he has a job.” For some reason we both found this hilarious and I instantly had the image in my mind of a cat’s head on a man’s body in a suit and tie at his desk job. I decided that I didn’t really care if this was funny to anyone else and that I was going to put it up on the site regardless, but I had also immediately come up with a followup comic that would become the first “Adventures of Business Cat” comic proper. The second comic went viral very soon after it went up, and the rest is history. So Business Cat was just a one-off thing that sort of snowballed?

Definitely. I never intended for it to be more than that one comic, but then when I saw how much people responded to the first one, I began to realize that I had more and more ideas for other strips and so I just decided to make it its own thing. I honestly thought that I would run out of ideas quickly with the premise, but at the moment I seem to keep feeling like I have more and more in the pipeline or some weird places I’d like to take it for a bit. If I ever start to feel like I’ve got nothing left to put into it, I wouldn’t hesitate to end it early, but for now I’m having fun making it.

What do you think has made it resonate so well?

More than anything I think it resonates because animals, and especially cats, are just innately funny. I’m the son of a vet and a vet nurse, so I’ve always had loads of animals surrounding me growing up, and I never seem to tire of their antics. Something about watching animal behavior just elicits pure joy, and as you mentioned, you need only look to the Internet to see that’s pretty universal. I think maybe why Business Cat did so well in particular is because putting those strange mannerisms and behaviors into the body of a human just adds another layer of absurdity that, for me at least, makes it even funnier.

The Business Cat cast of characters is fairly well established, but they work at what seems to be a pretty generic company. Do you know what that company is and what it does?

I have absolutely no idea what their company is or what it does, but I like to keep it that way because, in my mind, neither does Business Cat. I like the idea that he’s somehow lucked his way to the top of a massive corporation and has the money and means to follow his every whim while the people around him are left frantically trying to pick up the pieces. Perhaps it’ll be revealed in the future, though—who knows?

Do you have a favorite Business Cat strip you’ve done or one particular gag that really sticks out to you?

I’m one of those people that tends to hate pretty much everything that they do the moment after they’ve done it. I can’t bear to look at half the comics because of how badly I drew X or how much better I should have worded Y. I often find I’m always wishing I found a better way to do this and that joke, but every now and then something comes together that I’m happy with. Although the art bums me out now, one that I always point to as a strip where the gag really came together would be one titled “Running Late.” Tell us a little about the book you’ve been working on, if you can?

Yeah, sure. I was lucky enough to be approached by Andrews McMeel with a book deal, which still seems crazy to me now, and although we’re still in the process of putting it all together, you can expect to see it released in September. It’s shaping up to be something I’m pretty excited about and should include every comic strip thus far, plus some that have yet to go up, and a bunch of book exclusive content. I’ve had many readers wanting to see Business Cat in print for a while now, so I’m pretty happy to be able to offer that to them soon, and I don’t think they’ll be disappointed with the result.

Who do you think would win in a battle royale: Business Cat, Grumpy Cat, or Garfield?

You would think Business Cat should have the edge, being larger than the other two combined and the only one with opposable thumbs, but then he’s never has been much of a fighter.