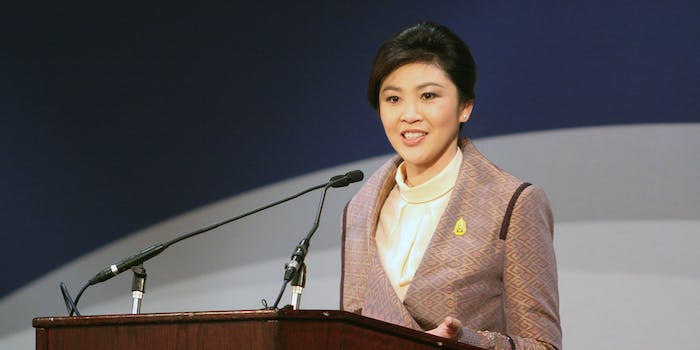 Yingluck Shinawatra's website had an unusual message for citizens. At least it seemed that way.

Thailand’s prime minister had an unusual message for citizens. At least it seemed that way.

The site was quickly taken down and appears to still be offline at time of writing.

It appeared as though a group called Unlimited Hack Team, which previously comprised the Culture Ministry’s home page, was behind the attack. Unlimited Hack Team denied responsibility on its Facebook page and claimed other hackers made it a scapegoat.

“Every time Unlimited Hack Team hacked a website we’ll come out to claim responsibility,” the team wrote, according to The Bangkok Post. “People should wait for police to find the perpetrators and punish them.”

Suranand Vejjajiva, the secretary general to the Prime Minister’s Office, told the paper the hackers will will be charged under the country’s Computer Crime Act if caught. That act, critics say, is used to quell free speech and criticism of the regime.

Earlier this week, Information and Communication Technology Minister Anudith Nakornthap said any sites that allow criticism of Shinawatra will be closed. He later retracted that stance, insisting that any site closures will be up to the criminal court.

As the Register notes any site owner who fails to deal with offending material on their websites may face trouble. Last year, a webmaster was given an eight-month suspended sentence after a user defamed the monarchy in a comment which was visible on the site for 20 days.

Photo by Foreign and Commonwealth Office/Flickr