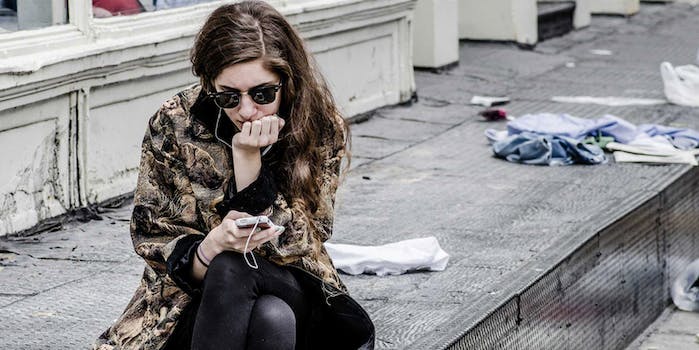 No, constant texting won’t turn you into a hunchback

Retired doctor and medical writer says claims of spinal damage related to texting have been overblown.

Constant texting can be dangerous—whether it’s behind the wheel or crossing the street. But it turns out that perennial claims that texting is having an adverse and potentially lethal impact on people’s posture may be overstated.

For years, stories have appeared online warning about the bodily harm associated with compulsively bending one’s neck downward to look at their phone. Many of these articles cite warnings from the United Chiropractic Association, which says that frequent texting can result in hyperkyphosis—a severe curvature of the spine that leads to increased mortality rates.

But recently, Harriet Hall of the blog Science-Based Medicine refuted the claims of the UCA. Though hyperkyphosis can do very real harm—particularly in the elderly—Hall argues that the link between this pronounced form of spinal disfiguration and texting has not been conclusively proven.

First, a quick crash course in chiropractic medicine. Kyphosis is a condition involving an “exaggeration of the natural curvature of the spine.” This malady becomes hyperkyphosis when this bend exceeds 45 degrees.

A recent Telegraph article positing the spinal dangers of texting notes that hyperkyphosis has been shown to increase mortality rates by 1.44 times. That’s roughly the same increase in the likelihood of death caused by obesity.

“Chiropractors have said a lot of silly things, but this ranks right up there among the silliest,” Hall writes. “They are just making stuff up and using scaremongering as a practice-building technique.”

Hall, a former family physician and Air Force flight surgeon who has written prolifically to debunk bad medical advice, says the idea that cellphone use could lead to irreparable spine damage is akin to the old wives tale that crossing one’s eyes can become a permanent condition.

Like most myths, there is a kernel of truth to this one, Hall says. Texting can lead to a mild form of kyphosis, so mild in fact that it’s what you or I might call mere slouching. And although slouching can cause some temporary muscle pain, it’s certainly not life threatening or irreversible.

The more severe hyperkyphosis condition (which would manifest itself like the Hunchback of Notre Dame), is usually caused by more dramatic factors. It’s often found in older people, particularly women, as a result of osteoporosis causing actual deterioration of vertebrae. In younger people, it’s usually the result of some kind of physical accident or birth defect.

“Remember when Mom told you not to cross your eyes because they might get stuck and stay that way permanently?” Hall writes. “Of course that can’t really happen; and no amount of hunching over a cellphone is going to produce a permanent hyperkyphosis either.”

So to put things in perspective, when it comes to cellphone use, you should be much more wary of the impact it has on your ability to pay attention rather than your posture. Though it’s still a relatively rare occurrence, the U.S. Consumer Product Safety Commission found that in 2011, more than 1,150 pedestrians went to the emergency room as a result of injuries they suffered while texting and walking. And recently, researchers at Cohen Children’s Medical Center in New York found that fatalities related to texting while driving have eclipsed drunk driving deaths among teens.