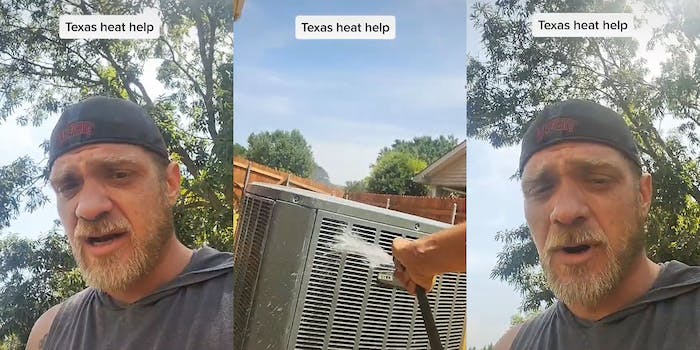 ‘I had no idea you needed to do this’: Texas AC hack goes viral

Here's why TikTok is hosing down AC units.

Texas is experiencing an intense heatwave of 100-degree-plus temperatures, one that is threatening the state’s already-strained grid. On TikTok, you can find plenty of people lamenting the heat or offering hacks.

A video from lowlifelexi, who claimed that they’d seen people putting umbrellas over their outdoor units to protect them from the heat, went viral last week. They say in the video that their AC wouldn’t go below 73 degrees, and that the temp in San Antonio hit 109.

This week, the account thewilliebeast offered a simple solution. The handyman, who goes by Aaron, lists off his credentials before saying that an umbrella will not do the trick. What will make the indoor temp go down, he says, is taking a hose to the vents and cleaning them thoroughly.

The TikTok has more than 6.6 million views

One of the top comments highlights the cognitive dissonance of this hack: “Me being surprised it’s waterproof even though it’s literally outside.” A commenter from Louisiana confirmed they tried it and it worked, as did a handful of others.

“Mud.” someone else commented. “Straight mud came out of mine.”

Other TikTokers confirmed that this method works, or showed the hosing-down in action (some before Aaron’s viral TikTok).

@llamapantss This helps with the unit to not overheat and breathe just as if the inside unit filters were clogged and dirty #actips #airconditioning #texasheat #summer #hvac ♬ Hard Work – U.S. Drill Sergeant Field Recordings

Update 8:22am CT, July 20: Aaron, who’s based in the Dallas area, tells the Daily Dot that he’s “completely blown away by the response. I was just wanting to help other[s] get a little relief from the heat and save their pocketbook.”