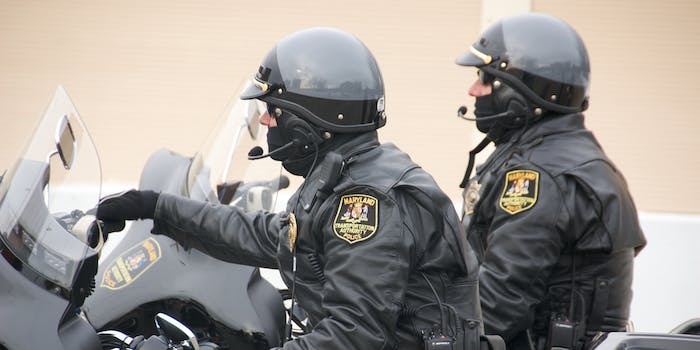 Inside the Texas bill that stops you from filming police brutality

Texas lawmakers don't want you to hold police accountable, and they're wrong.

Those with power must be held accountable for how they use it.

This may seem like a self-evident proposition, but it is actually facing a considerable challenge in Texas right now. If passed, a new bill sponsored by Rep. Jason Villalba (R-Dallas) would define the act of “filming, recording, photographing, or documenting the officer within 25 feet of [a police] officer” as “interfering” with their duties and, consequently, as being a crime (the limitation extends to 100 feet for residents carrying a concealed handgun). In short, H.R. 2918 wants to address the problem of police officers abusing citizens’ rights by making it harder in the future to prove that such abuses actually happen.

From a constitutional standpoint, this issue is about as cut-and-dried as they get. As one United States Court of Appeals explained, it is “fundamentally and virtually self-evident” that individuals who videotape police officers do so in order to spread information about the conduct of the individual officer(s) in question. This means that it is clearly protected by the First Amendment (which, we must remember, was created in large part because our founding fathers were being hounded by overzealous officers working on behalf of King George III).

Preventing a citizen from acquiring evidence of law enforcement wrongdoing is akin to prohibiting him or her from taking notes when witnessing an abuse. Unless you believe that one of those responsibilities is being able to harass, beat, or shoot innocent people with impunity, it’s pretty hard to effectively argue that last point.

Perhaps an even greater tragedy, though, is that this bill takes attention away from the possible good that can be wrought from modern technology. After San Diego police officers began wearing body cameras, complaints against police have fallen by 40.5 percent. Furthermore, the use of “personal body” force by officers has dropped by 46.5 percent, while the use of pepper spray has decreased by 30.5 percent.

Similarly, when Chief Tony Farrar of the Police Foundation completed a comprehensive year-long study on the effect of body-worn video cameras, he concluded that “the findings suggest more than a 50 percent reduction in the total number of incidents of use-of-force compared to control-conditions, and nearly 10 times more citizens’ complaints in the 12-months prior to the experiment.”

This isn’t to say that there aren’t downsides to using body cameras. In addition to the financial costs and understandable privacy concerns, there is also the possibility that “the credibility of police testimony against defendants could be discounted in the absence of footage to corroborate the officer’s version of events,” as Uri Friedman wrote in a December article for the Atlantic. Similarly, as the report that Farrar co-authored with experts like criminologist Barak Ariel made clear, there was a lack of consensus as to whether the initial promising results caused by body cameras were due to “a deterrent effect on the police, the public, or both.”

Of course, even if there is debate over whether mandatory body cameras for police officers are more pro than con, there isn’t much intelligent question over whether it should be illegal to record them in the line of duty. Unfortunately, this observation has yet to dissuade Rep. Villalba in Texas; indeed, he is far from the first politician to consider such a measure.

Last year, the State of Illinois passed an “anti-eavesdropping” law that would have made it illegal to record interactions with anyone (including police officers) without the other party’s express permission. In its ruling striking down the bill, the Illinois Supreme Court noted that because citizens’ encounters with police were by definition “public,” they couldn’t classify recordings of their conduct as an invasion of their privacy.

By the end of the year, the Illinois legislature replaced their first law with a new one that made it a felony to secretly record any conversation in which at least one person has a “reasonable expectation” to privacy, broadly defined to include “ any expectation recognized by law, including, but not limited to, an expectation derived from a privilege, immunity, or right established by common law, Supreme Court rule, or the Illinois or United States Constitution.”

Indeed, as jury decisions like the one in the aftermath of Eric Garner’s choking makes clear, it is entirely possible for bad cops to be caught red-handed and still get away with it. So why is there any traction behind the movement to make it illegal to record them?

One reason is so obvious that it doesn’t need much elaboration here: Namely, that many of these cops know they are guilty of racial profiling and/or disregarding people’s constitutional rights and wish to avoid getting caught.

That said, as someone who personally has friends and family members that work in law enforcement, I can say from firsthand knowledge that there is an additional reason besides this one. Many law enforcement personnel have, after years of hearing sharp criticism directed at their fellow officers, adopted a mentality which argues that one is either pro-cop or anti-cop, with no room existing between those two extremes. Even Rep. Villalba hinted at this when he referred to the 25-foot perimeter surrounding a cop from being recorded as a “halo.” By using literal angelic imagery to justify his proposed law, he implicitly used their virtuousness as a shield to protect them from accountability.

That premise, of course, is absolutely right, and it goes a long way toward explaining why holding cops accountable is so critically important. We do need police to protect innocent citizens from crime and generally uphold the law. Their services are absolutely essential to the maintenance of a stable and free society, and as such, they are entrusted with enormous power.

As incidents from the beating of Rodney King to the choking of Eric Garner clearly demonstrate, however, police officers—like all other human beings—can abuse that privilege. Hence why the new Texas law is utterly contemptible: At a time when the focus needs to be on how we can hold cops accountable while allowing them to do their jobs effectively, this bill attempts to remove responsibility from power.