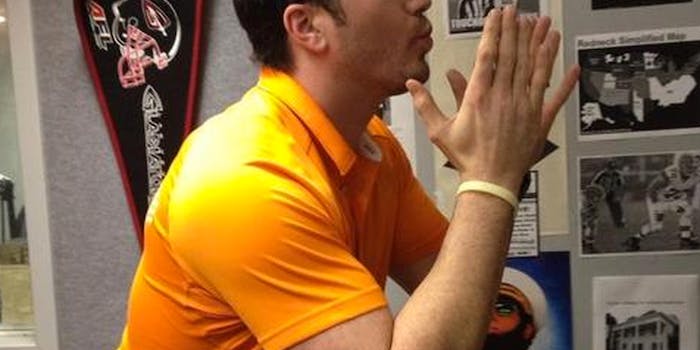 “Teoing”: Fake girlfriend scandal gets its own photo meme

It's like Tebowing and Eastwooding had an annoying baby.

Combine the absurdity of Eastwooding and a dash of Tebowing, and you’ve got the Internet’s latest ridiculous photo meme, Teoing.

The new trend mocks the revelation that famous Notre Dame football player Manti Te’o’s girlfriend never existed. Rather, she was a hoax possibly created by—but definitely involving— the linebacker for reasons that are still unclear.

While the the university sorts out what happened, the Internet is reacting accordingly (and lazily) by posting Teoing pics. It’s simple: Just pose next to your imaginary girlfriend by doing boyfriend-type things, like hugging or proposing to her. How original.

The meme sprouted Thursday on a Tumblr called #Teoing and has already garnered 60 posts. Here’s a look at some of the best ones.