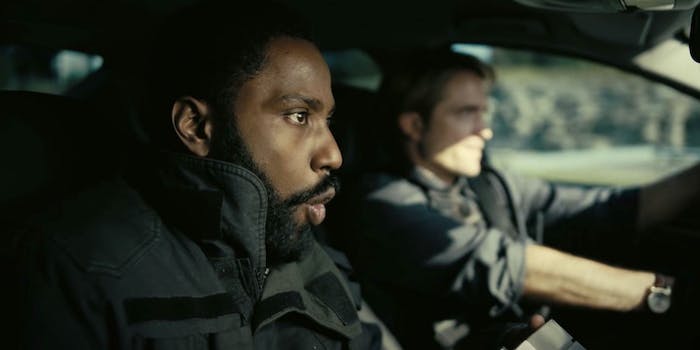 What happens when a character poops in ‘Tenet’?

We have some logistical questions for Christopher Nolan.

Tenet spends a lot of time explaining itself. The main characters are constantly discussing the logistics of time travel, the location of important objects, how to steal those objects, and so on. Ironically, the more the film explains, the harder it is to understand. The basic idea (a technology that allows people and objects to travel backwards through time) is pretty simple. Yet the circuitous exposition leaves you with more questions than answers. And not the deep, philosophical questions Christopher Nolan probably hoped for. Instead, you find yourself wondering… what happens if a character poops while time-traveling?

Christopher Nolan is obsessed with intricately-structured nonlinear storytelling, so I’m willing to believe Tenet “makes sense” on some level. However, this doesn’t really matter if the film’s internal rules aren’t clear to the audience. Unlike Inception (which you can easily follow as a fun blockbuster romp), Tenet‘s time-reversal concept is riddled with confusing details. Heat and cold are reversed when you’re traveling backwards, so when The Protagonist (John David Washington) is set on fire, he gets hypothermia. The status of his car is less easy to understand, as ice crystals form on the windows. He may be inverted in time, but the car is (maybe?) still traveling forwards, despite being controlled by his inverted body.

The simplest and most cinematic example of Tenet‘s concept is the one we see right at the start: the time-travel bullets. We see The Protagonist “shoot” bullets that get sucked back into his gun, reversing their path through time. Which brings us to the poop question. To my mind, there are two options here. Either a time-inverted person poops backwards like the inverted bullets (an objectively disgusting image), or they poop normally, while people outside the time inversion field see this happening in reverse.

An unscientific Twitter poll suggests that most people opt for the “backwards poop” option. This was a memorable punchline in an episode of the sci-fi sitcom Red Dwarf, whose characters get stuck on a planet where time goes backwards. In the context of Tenet, this puerile joke ties into a philosophical question about free will. Judging by the inverted bullets, a character in Tenet could theoretically materialize a turd outside their body, by intending to defecate in the future. Maybe?

Christopher Nolan is not interested in bodily functions. His characters rarely seem to enjoy sex or food, and he’s fond of sterile urban environments that resemble architectural illustrations. He’s essentially the opposite of a body-horror filmmaker. When his characters get injured, it’s often to illustrate a narrative conceit like Christian Bale’s missing finger in The Prestige, Guy Pearce’s nonlinear healing in Memento, or the numerous dreamworld “deaths” in Inception. In Tenet, we see The Protagonist slowly gain an arm injury in reverse. But it’s nowhere near as visceral as that horrifying scene in Looper, where a character gradually loses his limbs because they’re being amputated elsewhere in the timeline.

Tenet‘s main concession to human frailty is the oxygen masks, because you can’t breath normal air when you’re traveling backwards through time. On a couple of occasions, multiple characters travel back for several days. They lock themselves in airtight compartments, presumably with some time-reversed food to keep them alive. Pooping must also take place at this juncture. When they leave, the compartment reverts back into the normal timestream, and this theoretical poop maybe… dematerializes? As Robert Pattinson’s character explains at the end of the movie, we must simply have faith that the system works.

This absurd thought experiment illustrates why Tenet‘s constant exposition is a problem in itself. Time travel narratives are notoriously hard to explain, but plenty of movies—Looper, Bill & Ted, Predestination—illustrate elaborate timelines in a fun, accessible manner. Christopher Nolan did versions of this in Interstellar and Inception. The difference here is that Tenet‘s exposition scenes are unusually bad. Nolan is determined to overthink what should be a simple, easily visualized concept. By deluging us with quasi-scientific detail, Tenet invites more questions than something like Edge of Tomorrow, where the narrative rules are explicitly clear. Christopher Nolan dug his own grave. And now I’m stuck here wondering about poop logistics.

I’ve asked Mr. Nolan for a straight answer via the submission form on Tenet‘s website, but something tells me he’s not going to reply.

Tenet is now available to watch on video on demand.

WATCH NEXT: What Makes the Costumes of ‘Pacific Rim’ So Great?