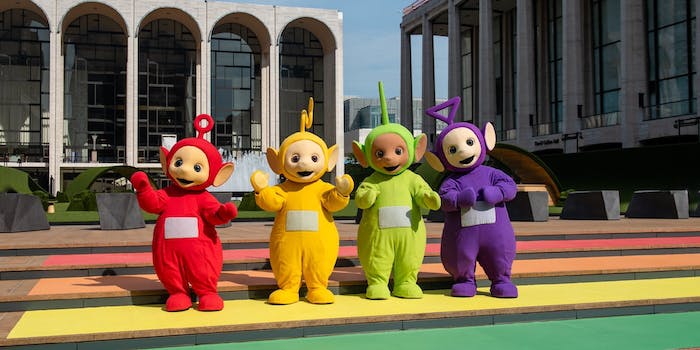 They received the Noo-nson and AstraTubbica vaccines, which have yet to be approved by the FDA for human use.

Yes, those cute, little, colorful aliens—Tinky-Winky, Dipsy, Laa Laa, and Po—from that one TV show in the ‘90s. Those Teletubbies.

As is customary these days, the Teletubbies shared their COVID-19 vaccination cards on social media, announcing, “We’re all vaxxed! Just in time for a Tubby hot summer.”

They’re neither Pfizer nor Moderna girls; they received the Noo-nson and AstraTubbica vaccines, which have yet to be approved by the FDA for human use.

Folks on Twitter seemed to have two primary reactions to this news, either happiness that the Teletubbies are “legal adults” or complete outrage at a children’s show encouraging their young viewers to get vaccinated (for the record, Teletubbies is marketed toward preschool-aged viewers who are not eligible for vaccination and not typically old enough to see this tweet).

Another user who goes by Pepi put it more bluntly.

“Teletubbies are 18 years old which means u can legally fuck them,” they tweeted.

“The Poopman” and several other users had similar questions and comments.

Those who weren’t trying to sneak into the Teletubbies’ beds and rail them were disgusted they got jabbed and turned off from the idea of watching the show ever again.

A flat earther Twitter user said, “They are now using Teletubbies as a way to normalise giving the [COVID-19 vaccine] to children. These people are truly evil.”

Someone else called the Teletubbies “vaxxholes” and called for a boycott of the show. Fellow anti-vaxxers wholeheartedly agreed.

Regardless of whether you plan to slide into their DMs or never watch the show again, the entire thing could—shockingly—be a hoax. Because the date of their second shot hasn’t happened yet, of course.