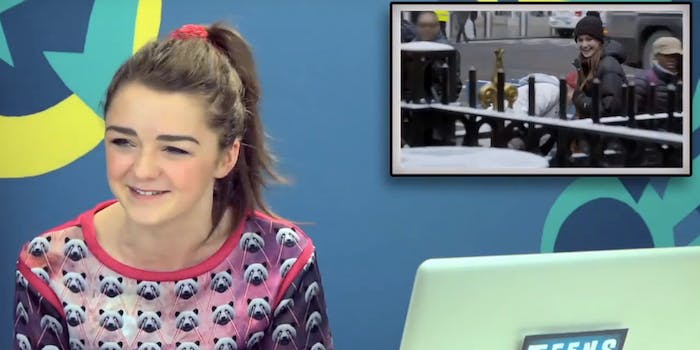 Arya Stark weighs in on the devil baby prank

The Game of Thrones actress joined 10 other teens in discussing viral marketing and more.

Winter is coming, as the Starks will remind us, but one Stark still managed to make the trip from Westeros to our computer screens.

Game of Thrones actress Maisie Williams stopped by the Fine Brothers’ Teens React after the duo discovered that the 16-year-old was a fan of the show. And her first episode featured what would be a fitting adversary in Westeros for the wild Stark on the run: the prank viral marketing stunt from Devil’s Due.

Arya Stark might not be a lady in any regard, but Williams was charming as ever as she discussed her thoughts and avoided adding any names to Arya’s infamous hit list. Williams’s guest appearance aside, it played out just like any other episode of Teens React as she and 10 other teens brought up everything from how they’d react to the baby to the merits of viral marketing.

But after showing that she’s not afraid to kill last season, how might Arya have reacted if she had encountered that baby?