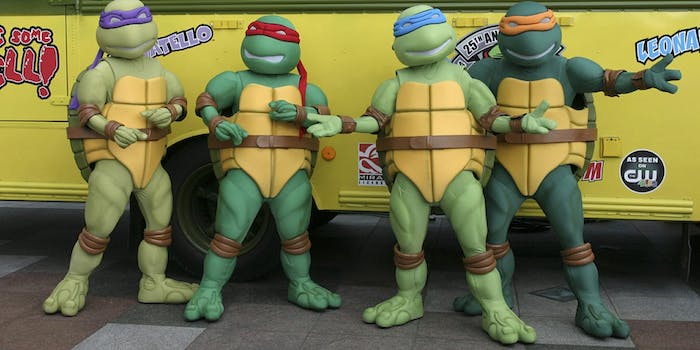 The Internet came to the aid of a man who wanted to wear a Teenage Mutant Ninja Turtles costume to his wedding—much to the surprise of his girlfriend who never expected things to turn out like this.

When Nic Vargus asked his bride-to-be if he could wear said costume on their big day, she replied, probably half-jokingly, that he could do it if his tweet about the deal were retweeted 100,000 times.

So, how did this happen?

Vargus tweeted that message on Wednesday afternoon. By Thursday morning, he only had 8,000 retweets. Soon enough, celebrities like Seth Rogen and the band Bastille got involved, and suddenly, that count started to climb exponentially.

Then, he hit the magic number.

As for what turtle he wants to be, Vargus tweeted that he’d leave it to his girlfriend to decide (he’s clearly feeling charitable), but he also said that he considers himself a Raphael.

Still, it sounds like Vargus has some work to do to fully placate his bride.

We really hope this isn’t a giant hoax. After all, we couldn’t help but notice that Vargus referred to Oakes as his “girlfriend,” not his “fiancée.”

Photo via Rubenstein/Flickr (CC BY 2.0)