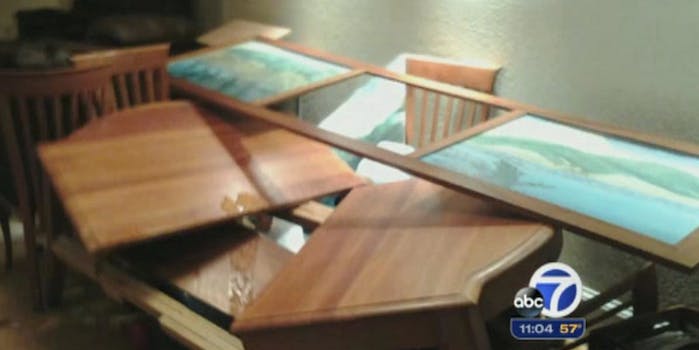 It was supposed to be a small graduation celebration for a few friends. It ended with a trashed house and weapons charges.

It was supposed to be a small graduation celebration for a few friends, four youngsters getting together to bake cupcakes and watch a movie.

It turned into a chaotic scene where hundreds of people showed up and caused major damage after finding out about the party through Facebook and text messages.

Michelle Hirschaut told CBS she’d left her 16-year-old daughter and three friends alone at her home Saturday in Aptos Hills, near Santa Cruz, Calif. Around 300 gatecrashers turned up to ruin the quiet evening, ransacking and robbing the home and causing tens of thousands of dollars in damage.

“It was an out of hand mob crime scene, that’s what it was,” Hirschaut, who noted that it wasn’t just teens who turned up, said.

CBS notes that photos posted on the Web showed the uninvited guests damaging the floor, breaking a couch and swinging from a ceiling fan. One person claimed the home was his and told others they could take what they wanted.

A neighbor tried to kick the uninvited guests out, claiming they were trespassing. After realizing she had lost control of the situation, Hirschaut’s daughter left the scene with the family dog and called cops.

Officers turned up and discovered teens looting, fighting, and breaking furniture. An 18-year-old named Anthony Arroyo was arrested on burglary and weapons charges, as were several other youths. Deputies said Arroyo had a rifle, shotgun, and jewelry stolen from the house, according to ABC.

The 16-year-old girl who hosted the party was cited as well.

Unlike in other cases where scores of teens trash homes and get violent after word of a party gets out on Facebook, Hirschaut did not blame her daughter for the chaos. “I absolutely do not believe that it was my daughter that made this happen,” she said. “I can’t go see a movie at night? Is that what you’re saying? I can’t ever leave my 16-year-old at home alone?”