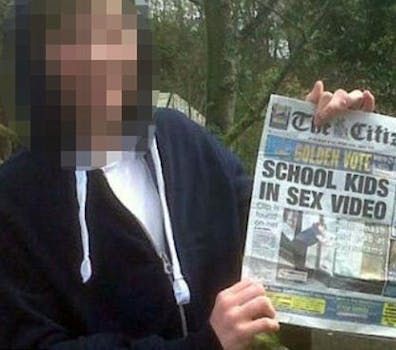 The 14-year-old boy who was arrested for a sex video posted on Facebook apaprently hasn't learned his lesson.

A 14-year-old boy who was arrested and warned over a sex video posted on Facebook has been enjoying the limelight, it seems.

He appears in a photo circulating on Twitter where he’s pictured alongside his local newspaper, The Citizen, in Gloucestershire, England. The paper’s front page reads, “School kids in sex video.”

The boy, who can’t be identified for legal reasons, recorded and distributed a video of himself and a 14-year-old girl engaging in a consensual sexual act. The video was posted on Facebook and shared among school kids.

“This incident has been the subject of much tweeting among my son’s peers,” a parent who saw the photo told The Citizen. “I find it hard to fathom that he was apparently allowed access to Twitter, Facebook or any other social media site to brag about his new-found ‘fame’.

“I feel desperately sorry for the young girl involved who, according to her tweets, was not aware that he was filming her, or that he intended to put the footage on Facebook. This boy has humiliated her and her family on an absolutely immense scale.”

The teen was arrested and given a final warning by police, meaning the incident will stay on his record for the next six years.

“Officers will be speaking to the boy and his father again to make sure he realises the consequences of his actions and that his Facebook activity is monitored,” said a police spokesman.

Photo via The Citizen