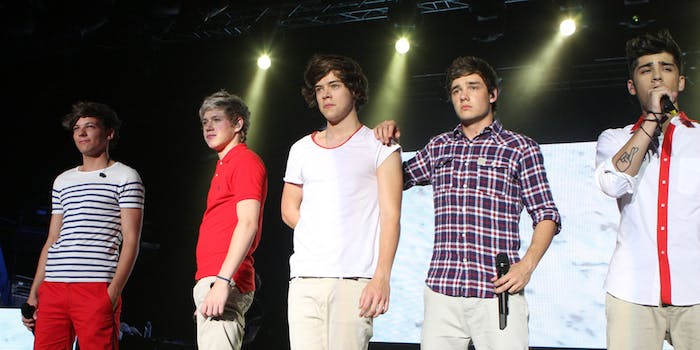 The TCAs are rigged—and teens are not happy about it.

This week, FOX premiered a more Internet-friendly Teen Choice Awards, and no one was happy about it.

Or, more accurately, no one was happy about their execution of it. The words “Teen Choice Awards” and “controversy” usually look strange next to one another, unless Miley Cyrus is involved. But when Vine celebrity Cameron Dallas made allegations online that the show was rigged, and voters were overruled in the end by producers, a minor firestorm erupted, and #TeensDontHaveAChoiceAwards began trending on Twitter.

Viewers were upset. And it didn’t help matters that a few hawk-eyed fans noticed One Direction wearing the same outfits in their pre-recorded acceptance video as they were photographed in days before, leading to more concern that the awards were determined before all the votes were cast.

Despite this indignation, there was a message that popped up at the end of the show, which read, “Teenasaurus Rex reserves the right to choose the winner from the top four vote getters.” The same text also appears on the Teen Choice Awards website, although given it’s fine print nature, it’s not all that surprising no one was aware of it. Still no word on what “Teenausaurus Rex” is.

While American teens are learning a harsh lesson this week, the truth is that this practice is actually the norm for less “serious” award shows. Emily Yahr of the Washington Post wrote Monday, “Hey, teens, none of this is surprising and/or new. Producers of non-prestige award shows (i.e. MTV Movie Awards, Nickelodeon Kids’ Choice Awards) frequently have to notify stars in advance that they won or else…well, those celebrities won’t show up. It’s just how it works.”

There were a few cries of dismay over the suggestion that the real teens of the world don’t have any power over the Teen Choice Awards last year, too, but it was the addition of the Internet celebrity categories that brought this issue to a tipping point. But as ridiculous as the whole situation is, it does present an interesting example of how teenagers view the power of the web today and how that power intersects with the power of voting in general.

Yahr elaborates on why, despite the naivety of the teenagers involved in this incident, the network was almost just as naive for not recognizing what they were signing up for. “Fox, it was a brilliant move to create all these new categories with nominees that have millions of Twitter followers, because when fans are inevitably encouraged to vote, it’s free promotion for the show,” Yahr writes. “But you should also understand that if something sets off a teen Internet star—regardless of how true or exaggerated it is—guess where they’re going to take their anger?”

Make no mistake, online celebrities are a big deal, especially to teenagers, but as legitimate forces of Internet capitalism too. In the ensuing TCA hubub, Time magazine’s Eliana Dockterman pointed out that, “YouTube vloggers and Vine stars, who primarily appeal to a teenage demographic, have accrued millions of subscribers and big endorsement deals with major brands like L’Oreal and Taco Bell.”

These self-made celebrities represent a divide between Internet culture and traditional entertainment, although in the case of the TCAs, the age difference therein is negligible. Dockterman equates it to “the tension between old Hollywood (that is, 20-something Hollywood) and new social media stars.”

The point is, the way Internet celebrities provide access to their lives is a huge part of what makes them more attractive to many teens. In a post-TMZ world, Hollywood’s biggest stars have all had to learn how to play the game better. As a result, their images are increasingly controlled, despite their continued presence in the media and online. Dockterman explains it thusly:

Angelina Jolie and Brad Pitt sell photos of their children taken by their own photographers to magazines so as to control their public persona; many celebs hire people just to run their Twitter account; and high-profile couples like Beyoncé and Jay-Z combat rumors of divorce with happy family photos on Instagram.

Sometimes, still, celebs go rogue, like when Kanye West interrupted Taylor Swift at the VMAs or Jason Biggs tweeted an offensive joke. But for the most part, celebrities have understood that the safest way to work to the top is to make it within the system.

Docterman contrasts this with the “authenticity” of Internet celebrities. Understandably for many teens, the relatability of goofing around on a computer holds a certain uniquely modern appeal, She writes that, “The seemingly spontaneous clips often involve Internet stars pouring out their hearts. Teens have latched onto these kernels of truth: unfiltered social media personalities have angsty feelings, make mistakes and call out authoritarian figures—just like us!

That said, there is a downside to this culture of easy access, and it applies just as much for Internet celebrities as it does for traditional ones. Perhaps more so, since they don’t have press agents to help get everybody to forgive them when they screw up. As Docterman argues, “authenticity is risky business.” He continues, “These stars, like their teenage peers, can be reckless on social media: just look at this most recent Teen Choice Awards scandal, or Nash Grier, the most followed person on Vine, who recorded a video using a gay slur. They’re also not beholden to a big studio or television network; accountable only to themselves, they’re freer to be candid without fear of repercussions.”

Docterman concludes his Time article by stating, “Today’s teens are savvy enough to leverage their personalities into lucrative global brands on YouTube—they’re more than smart enough to call bullshit on traditional media.”

But traditional media is far from beat. In response to the TCA controversy, the L.A. Times’ Saba Hemedy noted, “After the National Academy of Television Arts & Sciences brought on four social-media experts for red carpet duty at June’s Daytime Emmys, several media outlets deemed the live-stream experiment a “disaster” after the inexperienced hosts asked ill-informed questions and made inappropriate jokes in front of startled TV stars. They did, at least, get people talking about the show.”

Moreover, the draw of Internet celebrities on the Internet is one thing, but their power to put people in front of the television is still untested—which only makes sense. Why would you need to watch the actual awards show when you could just get the clips and reactions the next day online?

Indeed, if the numbers are any indication, teens’ disinterest in traditional television already seems to be waning. “Despite the heavy presence of Web favorites…this year’s awards show was even in ratings with last year’s, drawing in roughly 2.6 million viewers,” Hemedy observed. “According to Nielsen, the show earned a 0.8 in the key 18-to-49-year-old demographic both this year and last. Though the show was down slightly in the teens category (a rating of 2.7 versus last year’s 2.9), it was still the highest-rated program of the night among teens.”

Taking teens out of the equation for a second, the dichotomy between Internet celebrities and Hollywood celebrities remains huge. And Hollywood celebrities are still way, way, way up the food chain. Adam B. Vary astutely surmised earlier in the summer at BuzzFeed that the success of Angelina Jolie’s Maleficent and the failure of Seth MacFarlane’s A Million Ways to Die in the West are proof that people still want to see traditional movie stars.

Teens, on the other hand, feel a logical connection to Internet celebrities because they have grown up in a time where living their lives on the Internet is commonplace. And they’re good at it. The Pew Research Center released a study in 2013 that found “few teens embrace a fully public approach to social media.” Pew continued, “Instead, they take an array of steps to restrict and prune their profiles, and their patterns of reputation management on social media vary greatly according to their gender and network size.”

What does this mean? It means that teens are used to having control over their Internet lives, even with what an uncertain place the Internet is. And with this last Sunday’s TCAs, some of that control was taken away. Certainly, they were going to have a fit. They’re used to the Internet giving them what they want, because they know what to expect from it.

The Pew report also says that, “In broad measures of online experience, teens are considerably more likely to report positive experiences than negative ones.” This is in contrast to many adults, for whom the Internet is a source of great if necessary stress.

Michael Thomsen at Complex suggests that part of why teens aren’t as disillusioned about the Internet is due to where they’re at in their lives. “People who think of the Internet as isolating and diluting are not wrong,” he states. “Younger and more Internet-enthused people may not have reached the stage in life when social isolation becomes weighty, driven by momentum that’s increasingly hard to push back against.”

But maybe it’s not that teens are completely uncynical, but that they’re less cynical about the Internet for having basically never lived without it. Consider, if you can’t remember what life was like before the Internet, how can you critique life after it?

Silly as it sounds, the TCAs were a definite wake up call to some teens that the Internet, like much of life, is very capable of letting you down, a fact that is as sad as it is also undeniably correct.

After all, if voting for the TCAs seems bad, think about how lousy real civic engagement in America can be. Last year, the Pew Charitable Center essentially declared the U.S. voting system to be abysmal. CNN contributor David Frum echoed this pessimism in 2012. “Almost everywhere else, elections are run by impartial voting agencies,” Frum wrote. “Politicians of one party do not set voting schedules to favor their side and harm the other. Politicians do not move around voting places to gain advantages for themselves or to disadvantage their opponents. In fact, in almost no other country do politicians have any say in the administration of elections at all.”

So, yes, American teenagers, this country’s corruption problems go way beyond the Teen Choice Awards. But fear not, the power of Internet celebrities is being recognized more and more everyday. Even Hollywood institution Variety recently conducted a survey that acknowledged teens hardly care about mainstream stars compared to YouTube personalities.

So while we’re a long way off from the day when Internet celebrities are looked at like Brad Pitt and Angelina Jolie, teens can congratulate themselves knowing they brought that day one step closer. Of course, who knows if they’ll still be as faithful in the Internet by the time it gets here.