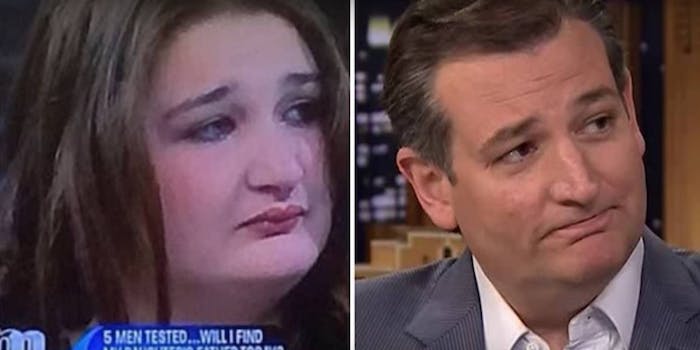 Searcy Hayes, the Natchez, Mississippi, woman who looks suspiciously like Ted Cruz but has pretty much no idea who he is, has agreed to do a sex tape.

The Maury guest first caught the attention of Reddit, who pointed out the resemblance.

Hayes’s boyfriend, who is undoubtedly relieved that she passed a lie detector test and that he has indeed been confirmed as the father, is set to star alongside his Cruz doppelgänger partner. The couple plans to spend their sex tape earnings on items for their son as well as big-ticket items like a marriage ceremony and a new truck.

The Daily Dot has reached out to someone familiar with transactions such as these and is awaiting a response. For now, Hayes has the happy ending she was never expecting: trust from the love of her life and incoming funds from making a very quick buck.

Update 1:22pm CT, April 24: Noted media broker Kevin Blatt was skeptical about XHamster’s announcement. He had this to say about the alleged sex tape offer:

I would highly encourage the woman to accept the offer only because no one ever does. You’d see real quick they don’t have the money to pay, nor would they know what to do. This type of offer only works with SEO and searches for mainstream celebrities, not unheard of lookalikes.