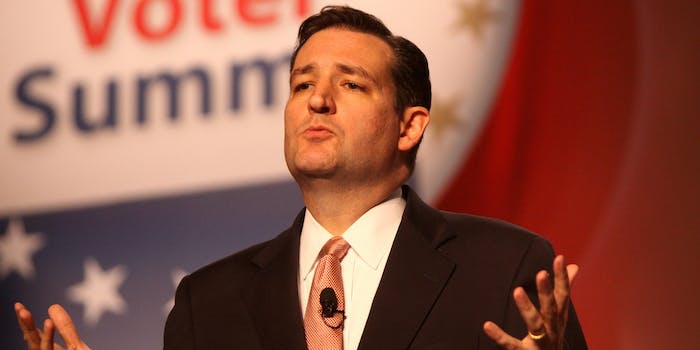 The real reason Ted Cruz will never be elected president

Ted Cruz has a truth problem.

Despite what he wants you to think, Ted Cruz is not the great anti-politician of our time. In fact, he may be our most potent symbol of everything that is wrong with modern politics.

This would be hard to believe if you’ve been listening to him, of course. He desperately wants to be thought of as the one principled man in Washington—at least if your values hew closely to those of the Tea Party—but that posturing has alienated much of the party establishment. Ted Cruz attributes that development to them being “squishes,” while the rest of the world suspects it’s because Cruz is the kind of guy who goes around calling his co-workers names like “squishes.”

Of course, being a showboat is forgivable in American politics; if it wasn’t, Bill Clinton wouldn’t still be as popular as he is today. The bigger problem with Cruz is that the thematic basis for his showboating—that he won’t sell out like the rest of the Washington phonies—is a whole lot of bunk, like the rest of his campaign. After all, Googling “Ted Cruz lies” pulls back an astonishing 7,890,000 results, and on Twitter, the two phrases are basically synonymous.

In Texas politics that’s probably considered a plus.

@TedCruz is a pathological liar. There is no truth to be found in this man.

We can start with the lies, which have been lovingly chronicled by pundits like George Zornick of the Nation. “Politicians lie. It’s almost non-controversial,” Zornick notes, before adding that “elected officials are advocates who want to show themselves and their causes in the best possible light. Nobody tells the whole truth.” The Cruz-ian fibs that he lists include such claims as the federal government threatening to shut down churches and hospitals which don’t alter their religious beliefs, ISIS crucifying Christians in Iraq, and crime rates rising in areas with stricter gun control laws.

As Ana Marie Cox of the Daily Beast explains, there is a possibility even worse than Cruz merely being a liar. “We take it for granted that politicians lie to gain votes, to make themselves more appealing, or to make someone else look bad,” she writes. “But what if Cruz wasn’t craven, but instead as sincere as he sounds. What would that mean?”

As she convincingly demonstrates, it would mean that Cruz is shockingly delusional. How else to explain a man who overestimates the number of IRS agents by almost 100,000 or claims that his wife Heidi immediately assented to sinking their life savings in his Senate campaign, even though her account of the events that took place drastically differed from his? There is a reason why Cruz’s Politifact profile only found him to have told the truth or half-truth on 18 percent of the nearly fifty cases they’ve investigated. Almost no politician on the site has a worse track record.

Cruz is actually very much a part of the financial corruption in the Beltway that Americans find so repugnant. Even as he denounced “crony capitalism” during his 2012 campaign, he neglected to mention his wife’s career as managing director of the Houston branch of Goldman-Sachs. Similarly, after forming a Leadership PAC to get around campaign finance law restrictions, Cruz proceeded to solicit and receive contributions from Big Money. According to Bill Moyers, Cruz has been backed by “American Bankers Association, Lockheed Martin, Intel, Northrop Gruman, CSX Corporation, Altria Group (parent company of Phillip Morris), and Comcast,” among others.

Having dispensed with the myth of Cruz as anti-politician, the next important question to ask is simply this: Why does he get away with making such an obviously fraudulent assertion about himself?

Part of the problem is that we live in an era which mistakes dramatic gestures for substantive idealism. Cruz’s infamous filibuster of Obamacare in 2013 is a classic case-in-point: Even though Cruz made headlines for his perceived defiance of the Obama administration, it was well-known among regular followers of Washington politics that his maneuver never had a chance of either repealing Obamacare or convincing other Republicans to join Cruz in an attempt at shutting down the government, lest it not be defunded.

The conventional wisdom, both then and now, is that Cruz was smart enough to have already known both of these things long before he commenced with his 21-hour speech. Even though it would accomplish absolutely nothing in the way of repealing the Affordable Care Act, Cruz understood that his base would lap it up for the sheer melodrama of the spectacle. What’s more, because most of the other Senate Republicans were working with Democrats to avoid another government shutdown, Cruz managed to make himself look like the one principled guy in the room.

All of this for a guy who recently announced he’s signing up for Obamacare.

For a less egregious demonstration of the same trait, look no further than Cruz’s recent speech announcing his presidential candidacy in 2016. Speaking to an audience of Liberty University students (who were required to attend), Cruz made wildly exaggerated allegations against the Obama administration, ranging from an assertion that they wanted to ban all forms of ammunition (the administration bill only targeted a specific type of armor-piercing bullet) to claiming that the Affordable Care Act had cost millions their insurance and forced millions of others into part-time work. Experts state that Obamacare has actually granted the benefits of insurance to 10 million people since its implementation, while placing the number of involuntary part-time workers caused by the bill as “likely” a few hundred thousand.

In addition to Cruz’s penchant for bloated duplicity, however, his reputation as an anti-politician is helped by the fact that he is stands no chance at actually winning an election. Thus, it’s easy to mistake his marginal status within the political ecosystem for genuine iconoclasm or ideological fortitude. As a society that instinctively sympathizes with underdogs, it is natural to assume that the long-shot is in his or her current situation because they are somewhat a threat to—or at least deviate in some meaningful and positive way from—the “establishment.”

As with everything else about Cruz’s presidential ambitions, this notion is belied by the bald facts. If you look at what Cruz has said and done, what you see is a politician as dishonest and entrenched in establishment ways as any other. Because he hopes to be elected president in 2016, Cruz has attempted to cast himself as an honest man in a racket filled with con artists. Fortunately, it seems most Americans realize that he is just as much a huckster as the rest of them.