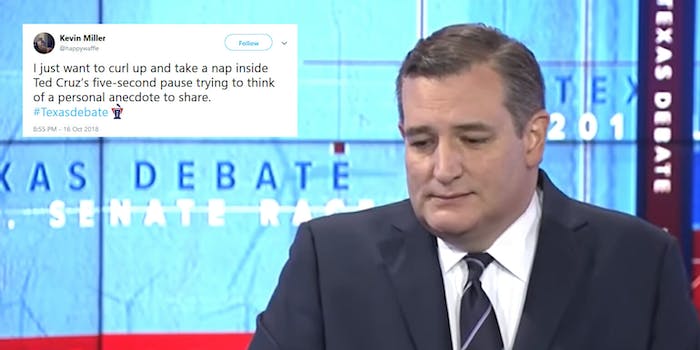 The question was really low-hanging fruit.

The two candidates were asked to say something they’ve done in the past year “that has nothing to do with politics” that would give voters an idea of who they were as “a person.”

Cruz was asked to answer first, and as HuffPost points out, he took an awkward pause before exhaling.

Not exactly the best response to an easy question.

The senator finally answered the question by talking about spending time away from his family while serving as a member of Congress, using an anecdote about coaching his daughter’s basketball team.

O’Rourke also spoke about his family.

The awkward pause from Cruz, however, caught the attention of some people online.

Moderator: “Give us some insight into who you are as a person.”

“What’s something this year that you’ve done?”
Ted Cruz: *long pause* “it’s hard to be a dad”

I just want to curl up and take a nap inside Ted Cruz’s five-second pause trying to think of a personal anecdote to share. #Texasdebate

That pause was too long…Let’s all help @tedcruz find time to figure out who he really is and spend more time at home. #TexasDebate #VoteBlue #BetoForTexas #VoteBetoForTexas

OH MY GOD THIS PREGNANT PAUSE FROM CRUZ ON WHO HE IS IS SO TELLING. It took him a full 10s to even think of his kids 😳 #TexasDebate #BetoForSenate #DumpCruz

When asked what the candidates have done outside politics in the past year that makes them look like a person, @tedcruz had a big dumb pause trying to compute. Seems accurate. #TexasDebate

The debate between the Republican senator and O’Rourke comes at an important time for the campaigns. The race is one of the most-watched in the country, but recent polls show Cruz pulling ahead of O’Rourke—despite the Democrat’s enormous fundraising edge.