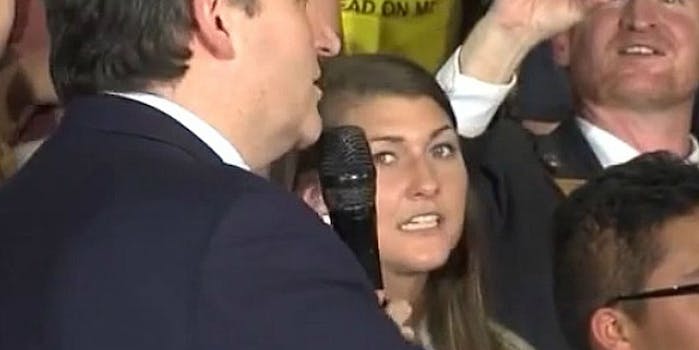 When you take into account the unthinkable faux pas Ted Cruz committed  this week when he called a basketball rim a “basketball ring”—in the setting of one of the most iconic basketball movies of all time, no less—it makes sense that he’s tried to change the narrative in the past few days.

Did you think the timing of his announcement that Carly Fiorina would be his vice presidential candidate on Wednesday was a coincidence? Did you imaging former House Speaker John Boehner’s comments that Cruz is “Lucifer in the flesh” and a “real miserable son of a bitch” weren’t welcomed wholeheartedly by the Cruz campaign on Thursday?

No, the Fiorina announcement wasn’t a coincidence, and yes, the Boehner comments were a breath of fresh air for Cruz. Because on Tuesday night in Knightstown, Indiana—in a state that Cruz desperately needs to win in order to stay relevant in the Republican presidential candidate race, and in the same gym where the movie Hoosiers was filmed—Cruz made men laugh and children shout.

But there was no joy in Knightstown on that day, because…

The mighty Cruz struck out. Struck out badly.

And one woman’s reaction said it all.

I’m sure Cruz was in the process of articulating some great cliché about how basketball rims—they’re basketball rims, goddammit—are the same height all across the great county, and how this land is your land, and ask not what your country can do for you, and all that political drivel.

And the woman, who isprobably a basketball fan—like all true Indianans—is ready to eat it up. But then Cruz drops “basketball ring,” and in that split-second you can see her realize that maybe Donald Trump or Hillary Clinton or Bernie Sanders isn’t such a bad choice after all.

This, after all, is the face you make when your biggest heroes have let you down (not unlike, say, the face Mary Pat Christie pulled behind Trump). 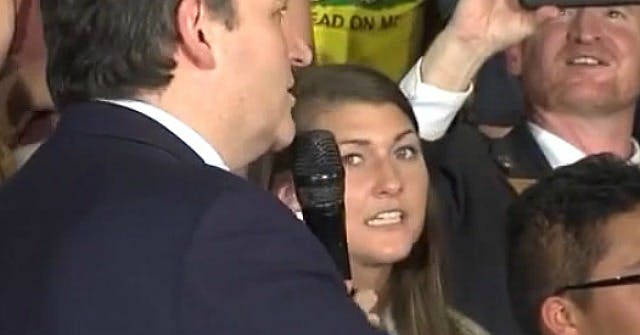 And the ramifications for Cruz’s slip-up? Disastrous.