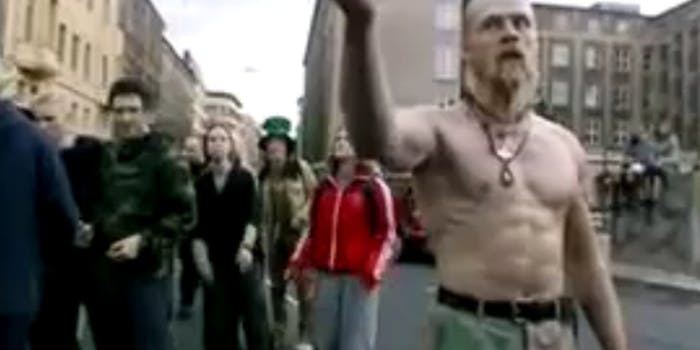 German court to decide the future of Technoviking

The star of one of the strangest Internet cultural phenomenons of the past decade is suing the artist who surreptitiously filmed him.

In a Berlin courtroom earlier today, the Technoviking met his maker.

The star of one of the most emblematic Internet cultural phenomenons of the past decade is suing the artist who surreptitiously filmed him, claiming he stole his image and profited from the results.

The birth of the Technoviking character began more than a decade ago, at 2pm on a cloudy day at the 2000 techno music festival Fuckparade in Berlin. Artist Matthias Fritsch had brought his camera to the event and focused it on a crowd of dancers.

If you’ve watched videos on the Internet over the past five years, you probably know what happens next:

A bumbling dancer stumbles into the frame, crashing into a woman. That’s when you see him: Tall, with blond hair pulled back into a ponytail and the menacing musculature of a WWE wrestler, the giant snatches the other man’s arms and shoves him away, then points menacingly after him. A few seconds later, satisfied with his display of authority, he starts to march. The other dancers follow in seemingly spontaneous lockstep. Someone runs up and hands him a water bottle, with the cool deference of a dark age thane to his viking lord.

All along, techno music thumps in the background. And then, the gentle giant starts his dance.

It’s like you’re watching the birth of a superhero in a Ben Edlund comic book. The sharp contrast between what you expect and what actually transpires, combined with a series of perfectly timed events that almost seem like pieces to a plot, make the whole video a single piece of accidental and hilarious art.

Once people on the Internet found it, they fell in love.

Fritsch used the video’s success to anchor his artistic career as he studied the meme as artform. He made his own remixes and created an online archive of all things Technoviking. The video featured prominently in his lectures as he traveled the world talking about Web 2.0 culture. All told, more than 16 million people watched the original Technoviking video, spawning hundreds of parodies and remixes.

“At the beginning I was reluctant to [do] it, because it could put me in the wrong light.” Fritsch told BerlinArtLink. “But I do not sell my art and generally do not consider myself as being part of the fine art scene, so I thought, why not. I can always stop it and it financed my rent and health insurance at the time.”

In 2009, the star of the video, whose real identity is still a mystery, hit Fritsch with a legal notice asking him to stop using the video and all derivations of it. Fritsch immediately stopped accepting money from YouTube.

Now, when you load up the original video, you’ll be greeted with a message.

“My Technoviking video is stopped here… because there is a legal problem with the clip’s protagonist which is still unsolved.”

That message didn’t help. The 2009 letter spiraled into a full lawsuit and trial, which began today in Berlin.

We’re not sure of the specific charges levelled against Fritsch. His lawyer—who did not respond to the Daily Dot’s request to comment—advised him only to speak generally about the case and declined to send us official court documents. Here’s what Fritsch told us.

I am being accused for creation and publication of images connected to the Technoviking, therefore infringement of personality rights. They also say I am earning a lot of money by that. They argue that [I] gave him the name Technoviking, create 3D characters, comics and more to constantly increase the popularity in order to market Technoviking and therefore cause damage to the protagonist.

If Fritsch loses, so does the Internet. He’ll have to scrub any original content he created that featured the Technoviking’s likeness, and he’ll be barred from creating new content. Worse, the lawsuit accuses him of creating numerous other derivative works, most of which Fritsch says he never touched. He explained:

Besides the original video and stills, this includes also all kind of user created content like comics, drawings, 3D characters etc.

Failing to do that, Fritsch would face a €250,000 ($334,441 U.S.) fine and up to six months in jail. Fritsch said the lawsuit only includes content he allegedly posted, so no matter the result of the trial, other Technoviking remixes around the Web are safe—for now.

“I can’t say how far his intentions go for removing content that is posted by other people,” Fritsch said. “It would be a Don Quixote action to try removing Technoviking from the Web.”

Fritsch, who still won’t reveal the Technoviking’s identity despite the lawsuit, said he’s not really worried about the trial. He doesn’t take credit for the Technoviking character, which he believes was born out of the collaborative creativity of millions of Internet users.

“I am only worried that the judge might not understand contemporary web-culture and therefore judges from an old fashioned perspective,” Fritsch said. “Artists are not rich usually and I am one of those artists. To put me in a financial emergency is really something I wouldn’t like.

Correction: The original version of this story misidentified the origin of the term Technoviking.