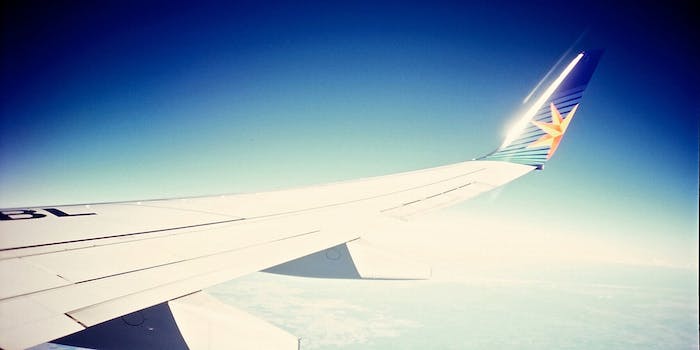 Google technology can pinpoint our location within a single room. So why can't we find Flight 370?

We are correctly told flying is the safest form of travel. We have bought into the world of the jet age, wherein the best technology available to man, a miracle of the modern era, enables us to safely traverse the globe in a bad recliner, eating pretzels from a bag while the Earth and all its residents pass beneath us.

When a plane goes down, carrying hundreds of people, we expect to find the answers, correct the mistakes, and furnish our fears with the calming reports of officials and engineers. We expect our miracle back. Or at least, we expect air travel to have at least the GPS capabilities available to the phones in our pockets.

Days out from the complete and utter disappearance of Malaysia Air Flight 370 and its 239 passengers, this is not the world we see. In a mystery befitting a Twilight Zone episode, the Boeing 777 simply vanished mid-flight somewhere over the Straits of Malacca (or perhaps over the jungles of Southeast Asia). No warning, no distress call.

And as of press time, no one has a damn clue how or why.

Astonishing to those of us who’ve never had reason to believe otherwise, the vast majority of airlines do not require the plane’s GPS system to report its location. Most plane locations are reported via old-fashioned radar, a useless technology when an aircraft is as far from land as Flight 370 was upon its disappearance.

This means search teams must rely on significantly outdated methods of finding the wreckage which can take years: After Air France Flight 447 went down over the Atlantic in 2009, it wasn’t until 2011 the wreckage was located. A Denver-based satellite imaging service has even crowdsourced the search, opening recent photos of the area to be scanned, pixel-by-pixel, for any sign of debris.

To highlight how behind these systems are, families of Flight 370 passengers have reported that their loved ones’ phones are still receiving calls. In fact, the popular Chinese messaging service QQ has shown many passengers as still being connected to the Internet, if inactive.

The lack of resolution is not the fault of Malaysian government or even the airline, but is a symptom of an industry that seems ambivalent at best and ignorant at worst in the face of possible innovations. The current radar-based system is least prepared for such worst-case scenarios as Flight 370 or Flight 447 and shows a stagnancy in responding to and learning from emergencies that could destroy any other industry.

Finding the sites of crashes can not only enable but force the aviation manufacturers and airlines to respond to the kinds of errors and missteps that do cause these horrific tragedies. Without a wreckage, all the industry and the victims’ families have is a mystery without a lesson.

And it isn’t until the wreckage has been found investigators can begin to ascertain just what brought down the 247-ton behemoth. For now, theories are only limited by imagination. INTERPOL ruled out the possibility that two stolen passports used to board the plane could link the incident to terrorism.

Without a black box, which is likely still emitting its signature emergency signal, any mechanical failure is still an option. And of course, the Internet has spawned its own theories, ranging from alien abduction to a “Vietnamese Bermuda Triangle.” Whatever the cause—be it an onboard fire, a bomb, or the supernatural—experts agree it was quick, unexpected, and catastrophic.

But how is it possible the full force of the aviation industry—which deplores missing information—is having more trouble finding a jet than I would if I lost my smartphone? This is supposedly the era wherein no modern citizen is without the ability to be found, whether by the NSA or their grandmother on Facebook. Did we really not think to bring intercontinental aircraft into this fold?

There are forces trying to implement the full benefits of satellite technology into the consumer aircraft market. One system by Boeing itself, dubbed Automatic Dependent Surveillance-Broadcast (ADS-B), would create a worldwide network between Air Traffic Controllers and planes in the air, allowing any ATC to see where any ADS-B-equipped plane is at any moment thanks to second-by-second reporting to GPS satellites. Such a system, if adopted globally, could have solved the mystery of Flight 370 and a dozen other aerial disappearances since the 1970s. Many delays stand in the way of ADS-B, otherwise known as NextGen, including a plethora of delays and an estimated $11 billion price tag.

But with 1 billion people expected to be flying annually by 2024—many of them on transcontinental flights—it is not only astonishing but pathetically negligent that such a crucial system relies on such archaic systems. The bewildering tragedy of Flight 370 highlights the anachronism of radar systems in a world where Google can identify my position within a single room. GPS technology went commercial more than 30 years ago and has only grown more widespread and accurate since then, yet the airline industry prefers the system used by Iceman and Maverick.

Systems like ADS-B or any satellite-based technology would not likely have prevented the crash of 370, but they can ease the suffering of families desperately awaiting answers. As reports come in of families being all but ignored by officials in what many see as a hopeless search for life, the value of their closure—not to mention the lessons to be learned from any major accident—is far more than worth the cost of dragging airlines into the 21st century.

If any airline wants to not just portray but actually give us the aura of high-tech comfort they sell, being able to find our charred bodies amongst the wreckage should be the least they can do.