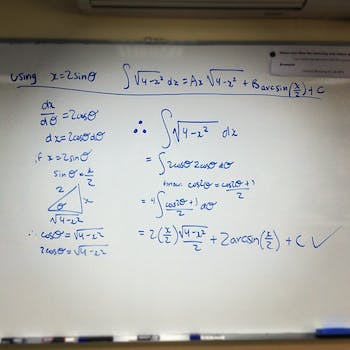 An elementary school teacher was placed on administrative leave last week after tweeting a math question that was not part of an exam, despite claims otherwise from another Twitter user.

The educator, Ralph Ratto, has not shied away from criticising the Common Core, an initiative for math and English designed to bring kids to a standard level of knowledge of each. He’s described the standards as “un-American” and “destined to hurt our academic standing in the world.”

To highlight his concerns, Ratto last Wednesday tweeted an example question he gave his fifth grade students as they prepared for a New York state assessment. 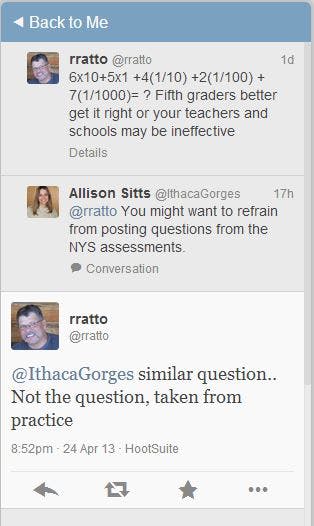 Ratto said he was pulled from class the following day by the school principal and was told that another Twitter user, Allison Sitts (account since deleted), accused him of sharing a question from the test.

“[M]y superintendent informed me that he would be contacting the Nassau County BOCES Superintendent and the New York State Education Department, regarding my ‘posting of a state test question,'” Ratto wrote in his blog post on the matter.

“He then informed me that I would be placed on administrative leave and would not be allowed back into my classroom. As you can well imagine, a heated discussion followed which I will not disclose at this time. Throughout the entire discussion I maintained my position that under the First Amendment I am entitled to post my opinions, and that I did not post any test questions.”

Two days later, while Ratto was working on lesson plans for a “unit based on the Bill of Rights, specifically the First Amendment,” he received a call informing him he could return to work Monday after being cleared. He noted that some parents thought he had been arrested.

Ratto had no doubt he would be reinstated. He’s now looking forward to teaching his students about the First Amendment. Perhaps he’ll talk about his recent experience related to that.