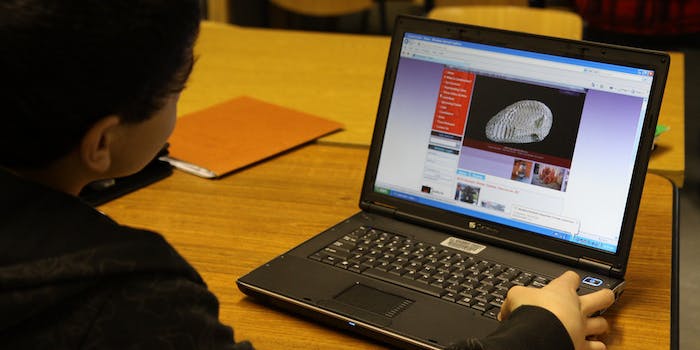 Writing your complaints on bathroom walls may have been safer...

Thanks to the Internet, teacher reviews have migrated off the walls of bathroom stalls and ceased reverberating in hallways, instead taking solace on popular sites like Ratemyprofessor.com. Students serve up digital retribution for a bad grade or sing praises for a teacher that saved their ass. Usually, it’s heavy on the former with a sprinkling of the latter. For a graduate student of tenured professor Sally Vogl-Bauer, a single bad review wouldn’t suffice.

Anthony Llewellyn was a student in a communications theories course taught by Vogl-Bauer at the University of Wisconsin-Whitewater in the Spring of 2013. According to a YouTube video, she would “degrade, demean, patronize, and verbally attack,” him when the two were in private. Llewellyn has gone to great lengths to describe his dissatisfaction with both Vogl-Bauer and the University’s administration, who he blames for ultimately failing out of school because of her treatment and grading of him in class.

He has outlined his plight in four seperate blogger.com pages under both the name Barry Grunter and Barry Grunder, multiple YouTube videos, and two posts filed on Teachercomplaints.com. Additionally, Llewellyn emailed the Eastern Communication Association, Better Business Bureau, and the Federal Trade Commission cataloging his issues with Vogl-Bauer, according to Gazettextra.com.

His exhaustive offensive against his former professor has earned Llewellyn a lawsuit that alleges his actions have caused Vogl-Bauer “substantial economic, reputational, and emotional injuries.” Though Llewellyn denies that his intent was defamation, only informing the public of his treatment by the professor. Both Vogl-Bauer and her legal representation, Tim Edwards, believe in students right to express their opinions about a teacher, but agree that what she has been subjected to crosses the line.

Vogl-Bauer denies all claims outlined in the various media that Llewellyn has produced, including that she told him repeatedly that he didn’t deserve to be in college and refused to accommodate his learning disability. Edwards and Vogl-Bauer had asked Llewellyn to remove his postings and videos, but when he refused, they served him with the suit.

The case is set to go to a jury trial in September, with the lawsuit seeking punitive damages and attorney and trial fees. Internet law still remains a largely grey area, with few precedent cases set. According to The Associate Press in January of 2013 the Minnesota Supreme Court ruled in favor of an online commenter who reviewed a doctor online calling him “a real tool,” that it was an opinion protected by free-speech rights.