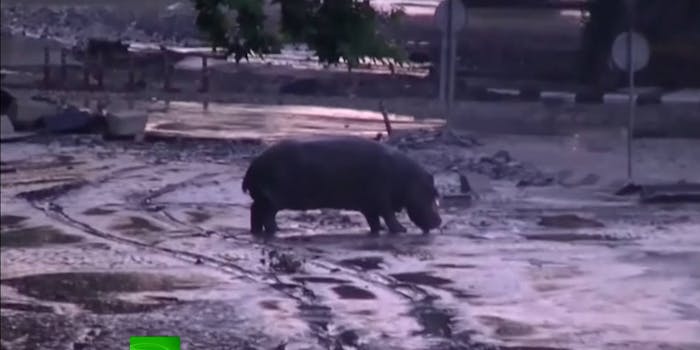 Zoo animals roam the streets of Tbilisi after devastating flood

At least half of the zoo's 600 animals are still missing.

Shocking footage from the flood zone shows hippos, lions, and bears roaming the streets of downtown Tbilisi, and dead tigers lying outside their destroyed zoo enclosure. At least half of the zoo’s 600 animals are still missing.

Numerous images from the floods are spreading on social media, along with some fakes. This video of an alligator swimming in urban flood waters was first posted in 2014, for example.

Georgia Prime Minister Irakli Garibashvili advised Tbilisi residents to stay indoors to avoid the floods and the many wild animals still wandering around the city. Several photos show scenes like a bear balancing on top of an air conditioning unit outside someone’s window, and an adult hippo eating plants on a public street.

A hippo and other animals escape from a flooded zoo in Tbilisi on June 14, 2015. AFP Photos / Beso Gulashvili pic.twitter.com/phM5Lm960M

A representative from Tbilisi Zoo told InterPressNews that most of the zoo had turned into a “hellish whirlpool,” and many of the escaped animals had to be shot for public safety reasons. “Some 20 wolves, eight lions, white tigers, tigers, jackals, jaguars have either been shot dead by special forces or are missing. Only three out of our 17 penguins were saved.”

The hippo was safely knocked out using tranquilizer darts.

The flooding occurred when the river Vere burst its banks, leaving thousands of residents without clean water or electricity. Rescue workers are still attempting to bring people to safety across the city.