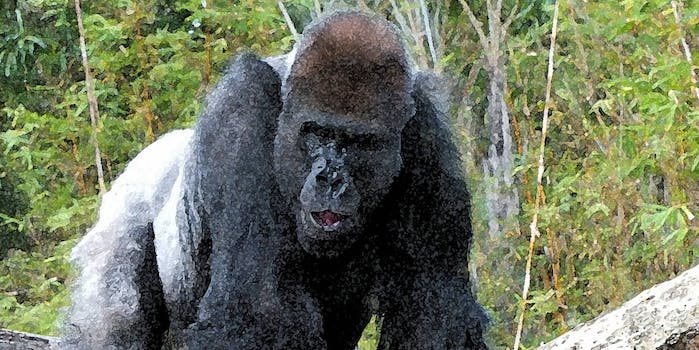 Some celebrities had a boring feud about a song and whether it’s chill or not. This really heated up when Kim Kardashian released video footage of one Taylor Swift saying the song was chill. Swift claims it still isn’t—and that the filming was illegal. That’s not what interests the general public, who love to stoke a solid celebrity roast and watch the world burn upon it.

In the eyes of the internet, Swift got owned by Kardashian. A mural was painted on Tuesday to commemorate the reality star’s victory and mourn the loss of the pop singer. Street artist Lushsux slapped Swift’s signature (well, almost) and likeness on a wall in Melbourne, Australia.

The mural was defaced on Wednesday for dark horse PM candidate and slain silverback gorilla Harambe. It combines the hot 2016 meme SpongeGar with an endangered animal mercilessly killed at the Cincinnati Zoo. And, goddamn it, it gets Harambe’s birth year wrong.

Are you sure you’re a real fan, graffiti meme artist? Name three Harambe conspiracy theories. And not just the one where he’s still alive at the age of 17. I’ll wait.