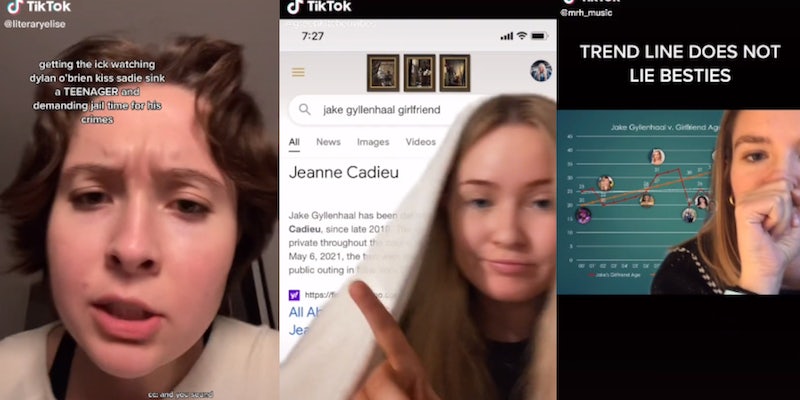 Taylor Swift has an incredible skill for translating the personal into the universal. “All Too Well” is a perfect example—a song that’s inextricably linked with A-list celebrity gossip (Swift’s brief relationship with Jake Gyllenhaal) while also being a relatable breakup anthem. Her new 10-minute version resonates even further, prompting fans to reevaluate their own relationships with older men—and reconsider Gyllenhaal’s status as a lovable hunk.

Like many of Swift’s love songs, we can only speculate how much of “All Too Well” is fictional and how much draws from real life. All we know is that Swift and Gyllenhaal dated from October to December 2010, when she was 20 and he was 29. She wrote “All Too Well” during a period of heartbreak, and the lyrics involve imagery like a scarf that the narrator left at her boyfriend’s sister’s house. (This became so iconic among Swifties that Maggie Gyllenhaal was actually asked about the scarf on a talk show. She doesn’t know where it is!)

The new video for “All Too Well” invites speculation about what really happened between Swift and Gyllenhaal. Directed by Swift, the 10-minute film casts Stranger Things actor Sadie Sink (19) in the lead role as “Her,” with Teen Wolf actor Dylan O’Brien (30) as her boyfriend, “Him.” The age gap is certainly noticeable: O’Brien was a millennial teen star ten years ago, while Sink is a teen star now.

Initially a sweet, nostalgic love story, the video begins to introduce red flags like Him distancing himself at a party with his (older) friends, and Her doing the dishes during an argument. We gradually notice an unequal power dynamic at play, as he becomes emotionally distant while she is more vulnerable. The video critiques the pitfalls of an age gap that’s often normalized in pop culture and real life. As one TikToker put it, if you’re “getting the ick watching dylan o’brien kiss sadie sink a TEENAGER,” then that’s “literally the point.”

For viewers of the same generation as Taylor Swift, this video is especially effective. Rather than being a song written by a 21-year-old about a recent breakup, it’s a reimagining written and directed by her 31-year-old self. The film ends with Swift replacing Sink in the lead role, publishing a book about the relationship with Him—an obvious metaphor for the song itself. This framing device echoes many women’s experiences as they grow older, looking back on past relationships and realizing they weren’t as romantic as they seemed at the time. The video doesn’t portray Him as abusive, but it does look back with a critical eye, picking up on problems that a 20-year-old wouldn’t necessarily have understood.

Of course while the song can be read as universal, it’s also inspiring people to criticize Jake Gyllenhaal specifically. In addition to the Swifties who took the video at face value and got mad at Gyllenhaal for his supposed behavior 11 years ago, “All Too Well” placed further scrutiny on Gyllenhaal’s love life overall. One particular lyric stands out: “I’ll get older but your lovers stay my age.” As many people are pointing out, Gyllenhaal’s current girlfriend Jeanne Cadieu is 25, while he is 40. They got together three years ago.

Jake Gyllenhaal has never really commented on his relationship with Taylor Swift, or on “All Too Well.” We truly don’t know how much of the song relates to real events, and while some people are interpreting the video directly, it’s definitely not a documentary. This places Gyllenhaal in a similar position as Leonardo DiCaprio: A male movie star whose love life is criticized on rather symbolic, generalized grounds. Gyllenhaal does have a history of dating younger women, but the intense response to the “All Too Well” video has more to do with people’s own experiences than with anything specific that Gyllenhaal has done himself.

We’ve reached out to a representative for Gyllenhaal.