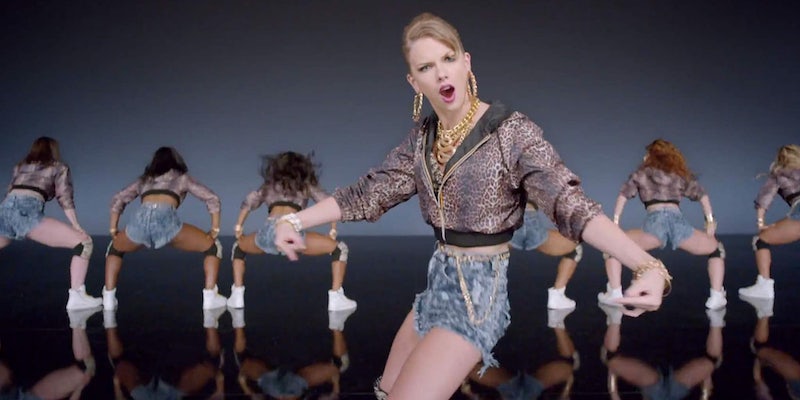 Taylor Swift is just the latest singer to get called out for using blackness as a prop.

For a 24-year-old girl who mostly sings sappy love songs, Taylor Swift has become quite the lightning rod when it comes to attracting controversy.

With the release of the video for her song “Shake It Off,” Swift drew ire this week for content within the clip that some considered to be racially insensitive. Odd Future’s Earl Sweatshirt caused a splash when he called Swift out on Twitter, and others soon followed suit.

Earl (who is no stranger to offensive material himself, though he has since denounced some of his early work) singled the video out as blatantly disrespectful to black people. In a series of tweets, the rapper wrote, “Haven’t watched the taylor swift video and I don’t need to watch it to tell you that it’s inherently offensive and ultimately harmful. Perpetuating black stereotypes to the same demographic of white girls who hide their prejudice by proclaiming their love of the culture. For instance, those of you who are afraid of black people but love that in 2014 it’s ok for you to be trill or twerk or say nigga.”

“Shake It Off” is seemingly intended as a playful sendup to fellow pop stars like Lady Gaga, Zooey Deschanel, and (of course) Miley Cyrus, combined with the frequently used video trope of employing styles from different eras. However, though not as pervasive in terms of black memes as some of its predecessors, the twerk-heavy/hip hop-influenced (Swift actually raps at one point) offering comes on the heels of several other poorly received and racially charged videos from young female artists.

Miley Cyrus has been the chief culprit in this, but Katy Perry, the critically acclaimed Lily Allen, and even indie darling Sky Ferreira have also been accused of cultural appropriation and exploiting black stereotypes as of late. Moreover, Perry has drawn criticism from Middle Eastern and Asian communities for using tropes from their cultures, too. You can also throw Gwen Stefani and Avril Lavigne into the mix for Asian appropriation, along with Lana Del Rey, who has taken from Latinos and Native Americans, and Selena Gomez, most recently seen wearing an Indian bindi and sari.

Seeing this much cultural appropriation and insensitivity lined up, it’s hard not to wonder, what is going on here? What were these women thinking, and why were they all thinking it at the same time?

Granted, cultural appropriation in pop music isn’t anything new. Madonna was accused of it way before Miley and her peers were. Men are probably more guilty of it in the long run. One could argue that the history of the blues has seen the genre stolen and bastardized by white men who took it from the black community. It’s also important to note that female artists are often held to unfair standards, as “role models” and such, that men aren’t.

Still, offensive is offensive. And with so many popular, dynamic, and varied young female artists jumping at the chance to capitalize on cultures that are fundamentally not their own, it’s getting increasingly difficult to shrug this trend off.

This conversation is impossible to have without talking about Iggy Azalea, who, unlike others that have simply used cultural appropriation in their imagery, has crafted a whole persona around it. The Daily Dot’s Derrick Clifton writes:

Depending on who you ask, including an offbeat piece from Forbes, rap’s “Fancy” new starlet is now dominating the entire genre, especially since she’s now the female rapper ever with the longest reign atop the Billboard Hot 100… But it seems as though every time conversations crop up about Iggy Azalea, Macklemore, or even Robin Thicke’s appropriating ways, the vocal critics get panned—mainly by white people—as a horde of racists for ‘attacking’ their participation in black artforms, no matter how intrinsically rooted they are to black experiences… Our sayings, dialects, and even vocal dynamics may bear common roots, but are heavily influenced by life experiences, education and regional differences… though Macklemore arguably uses and abuses the white privilege he’s fully aware of having within hip-hop and popular music, he at rhymes using the vocal dynamics derived from his lived reality. Iggy Azalea’s natural speaking voice is actually the sugary-sweet, rural Australian accent she grew up with—not the grungy, Southern ‘blaccent‘ she adopts for the sake of rapping.

As Clifton suggests here, there are ways to imitate black artists that don’t explicitly demean them or the black community, and that actually honor the legacy of black music. In fact, he singles out Adele, Duffy, and Sam Smith as examples. But the problem with someone like Azalea is with her accent, her clothes, and her general image, one could argue that she’s basically a step away from black face. That’s not to say Azalea doesn’t truly love the kind of music she’s taking from. But loving hip-hop, or any kind of black music for that matter, doesn’t really make it okay for you to “act black,” insomuch as whatever you think that means.

However, the interesting thing with Swift and the rest of the aforementioned pop stars is that not all of them are making music that sounds intrinsically African-American (or that sounds derivative of any other specific culture, for that matter). That doesn’t always make things better—poorly imitating black music (see: comedians’ rapping) can be just as offensive as imitating black music well, because the basis of this can come from the idea of “look at how silly this thing that I’m doing is.”

But all joking aside, Taylor Swift knows she’s white. She’s not like Azalea, who’s trying to be black so hard it hurts.

What Swift and company are doing though is almost worse. The through line in most of these videos isn’t wholeheartedly the imitation of black culture, it’s the use of black people as props.

When Cyrus appeared in Rolling Stone back in 2013, she responded to criticisms by stressing that she, too, is aware of the privileged background she comes from. But as Dodai Stewart at Jezebel noted, “Most critics are not accusing her of trying to be black; they’re pointing out that she is using black people as accessories to look cool and hip—like donning a leather jacket or a pair of sunglasses. Except humans are not fashion accessories.” Stewart continues, “Critics were also offended by the jokey commodification of black women’s bodies.”

Cyrus also made it clear in her Rolling Stone appearance that she has a lot of support from black people in the music industry. But as Earl Sweatshirt’s frustration with Swift illustrates, not everyone is so supportive of these pop stars’ “tributes.” Just last week, Nicki Minaj let Cyrus know that she was not too happy Miley’s Instagram tributes to her single “Anaconda.” One can only assume Minaj wasn’t into Cyrus’ decision to engage yet again in the “jokey commodification” of a black woman’s body.

The underlying sadness of this trend is that it obscures how hard it really is to be black in America. As this week has tragically shown, white pop stars get to enjoy the fun parts of black culture, without ever having to think about any of the bad stuff that comes with it. In the words of Malek Mouzon at Huffington Post, they’re living in “a type of post racial illusion where minstrel images or just part of exploring your creativity and having fun.”

Except this illusion is just that—it’s not real. “[We] don’t exist in any sort of post-racial world,” Mouzon reminds us. “Racism is still very real. An unfair double standard faced by black men and women face a very real double standard when it comes to dealing with law. And there is a complete lack of value in the black body…except of course as a sexual tool or as a means of entertainment.”

From a listener’s standpoint, this presents an obvious conundrum. It’s hard to write off any of these artists completely, especially with the rampant and casual sexism in the music industry. Mouzon bemoans, “I feel like I would be lying if I didn’t admit I didn’t want to write this article. I honestly love several of these musicians. In fact, just this year I attended my first Beyoncé and Miley Cyrus concert. I’m the rare creature who had a fantastic time at both. It’s interesting that what I remember most about the concerts, was the make up of the audience. There were fans who were black and white, Asian and Latino, gay and straight. Fans who experience America very differently but can still come together for someone they care about.”

Fans should be able to come together for someone they care about. And why wouldn’t they, considering the pedigree of the artists being discussed here. Taylor Swift has sold more records than is almost humanly possible in this day and age. Say what you will about Miley Cyrus, but she’s a savvy businessperson with an image that she carefully designed herself. Lily Allen’s video for “Hard Out Here” could have been the feminist rallying cry she wanted it to be based solely on her decision to skewer the grossness of Robin Thicke’s “Blurred Lines.” Sky Ferreira is a singular pop talent, the likes of which we haven’t seen in ages. And if nothing else, Katy Perry recorded one of the legitimately great pop songs of the last decade.

None of this diminishes these women’s culpability in their regrettable decisions to use race as a play thing. But after awhile, it becomes important to frame these decisions as a larger outgrowth of the music industry. For a young female artists who’s spent most of her life in Hollywood, it’s automatically going to be harder to gain the cultural sensitivity that comes with living in the “real world,” so to speak. On top of that, the business-side of the industry is so white, it isn’t any wonder no one knows how to properly credit black artists. Even in 2014, there are a stunningly low number of major record executives that aren’t white.

There’s a great scene in the new James Brown movie, Get On Up, where Brown is told by a white man that he is the business side of the music business, while James has to stick to the music. Herein lies the dark undertones for the exploitation of black artists: You are a product. You are something to be packaged and sold. We own you, and while we pay you, we don’t pay you to think. It is this ethos that leads otherwise talented female pop stars to take what it means to be black, or what it means to be any other minority, and turn it into a gimmick for their own benefit. This usually happens indirectly and often without notice. But that it happens at all is still damaging.

White people have an old tradition of misunderstanding their part in black music. It’s hard for many to grasp that being a fan and being a fetishist are not the same thing. In a now famous Vulture article from earlier this year, The Roots’ Questlove wrote that his genre of music had failed black America in this regard. That when hip-hop became synonymous with black America, other parts of the culture lost their power.

And that perhaps, we all failed black musicians, at least a little bit.