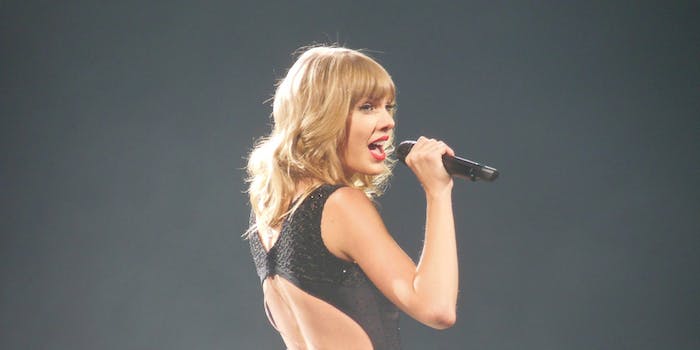 What Taylor Swift’s war on Apple and Spotify gets wrong

Musicians don't need Taylor Swift to save them. The industry needs unions.

Taylor Swift is always brilliant, even when she isn’t.

After her Fall 2014 breakup with Spotify, where she pulled all of her music from the streaming giant, Swift took Apple Music to task for allegedly not planning on paying royalties during users’ three-month trial periods. In a letter published on Swift’s Tumblr page, titled “To Apple, Love Taylor,” Swift made a case for why writers, producers and artists deserve to be paid for the work they do—after all, as she wrote, three months is a long time to go unpaid for any type of labor.

“This is not about me. Thankfully I am on my fifth album and can support myself, my band, crew, and entire management team by playing live shows,” Swift wrote, noting that her fight is for those in the music industry who work “tirelessly to innovate and create, just like the innovators and creators at Apple are pioneering in their field.”

She added, “These are not the complaints of a spoiled, petulant child. These are the echoed sentiments of every artist, writer, and producer in my social circles who are afraid to speak up publicly because we admire and respect Apple so much. We simply do not respect this particular call.”

But is Taylor Swift’s bold stand really as grand as she—and others who have lionized her recent air of defiance—really thinks it is? Not quite. Swift’s approach is cupcake at best, a prescriptive approach that attacks the symptoms of a much deeper problem. Streaming services are only as powerful as the industry labels that enable lopsided deals, both between the label and the streaming service, and between the label and the creatives who generate the music we all appreciate so much.

Swift’s approach is cupcake at best, a prescriptive approach that attacks the symptoms of a much deeper problem.

An artist cutting off their music from streaming services isn’t the answer. What the industry needs is more unionizing.

It’s quite disingenuous for Swift to align herself too closely with up-and-coming artists and others who may otherwise struggle to make a living in a climate that continues enabling inequitable revenue sharing. Someone of Swift’s caliber, as she seems to be aware of in her Tumblr post, can afford to publicly rail against Apple, because she’s already made it to the top. If anything, Apple needs Swift’s gravitas (and money from her fans) more than Swift needs any favor from one of the world’s largest tech companies.

If smaller artists took Swift’s position against an Apple or a Spotify, it’d be much more of a David versus Goliath type of battle. However, this one’s a battle between two heavyweights who will be just fine no matter what contractual disagreements they may have over revenue sharing. Even though Spotify CEO Daniel Ek said that Swift would otherwise make $6 million annually based on her rate of streams through last November, her 1989 album itself netted roughly $12 million in first week sales.

Swfit’s stand, then, is more of a symbolic gesture than a direct approach to fighting for music creators to be paid fairly. Even if services like Spotify and Apple Music pay more money for what they stream, the dollars still flow into the callous, uncaring hands of music label executives.

At the current rate, as Aram Sinnreich, a professor at Rutgers University with a focus on music and technology, told Mashable, “Aside from the Taylor Swifts of the world, three months of royalties for 99.9 percent of artists is barely enough for a sushi lunch. With 30 million songs, consumers are not generating that much revenue for any individual rights holder.”

And as the Daily Dot’s Taylor Hatmaker notes, Taylor Swift didn’t make any real changes to how Apple Music conducts business. Her intervention forced Apple’s to backtrack on the 71.5 percent deal and default back to the standard 70 percent rate.

Swift addresses their plight in a way that would make Marie Antoinette proud. Instead of fighting for real pay equity, which puts food on the table of an otherwise starving artist, Swift told Apple to let them eat cake.

It’s a drop in the bucket. Even with the relatively small increase from Apple, it only follows the free, three-month trial period where music creators still aren’t paid a thing. For her lesser-known peers, then, Swift addresses their plight in a way that would make Marie Antoinette proud. Instead of fighting for real pay equity, which puts food on the table of an otherwise starving artist, Swift told Apple to let them eat cake.

“Indie labels that choose to play the game are still screwed, just like everyone else. The numbers get smaller and smaller as they trickle down from mega-stars like Taylor Swift to normal people making music,” Hatmaker writes. “It’s extra ironic then that Swift’s parent label Universal was recently under investigation by the Federal Trade Commission (FTC) for colluding with Apple against Spotify and other services that offer a free streaming tier to attract new potential paid subscribers (Apple Music is paid/premium only). If only Swift would stand up to the real bad guys: the ones cutting her checks.”

That sentiment about problems caused by label bosses isn’t just one noted by industry observers and writers. It’s also how some insiders actually feel. In an interview with Billboard, The Dream (real name Terius Nash)—the singer-songwriter behind hits such as “Umbrella,” “Single Ladies (Put a Ring On It),” and his own solo projects—said major labels are “evil.” Nash, told Billboard that an approach like Swift’s isn’t universally applicable both because of the current revenue sharing model and respective fanbase demographics.

“[A]rtists are treated like slaves. We have terrible contracts, we have streaming services that pay one-tenth of a cent per play, we have no laws to protect us,” Nash said, noting that he would support a move towards collective bargaining.

However, unlike Swift, Nash can’t pull all his music off of streaming services because he’s black, as is most of his fanbase. The industry just doesn’t work the same for black artists who are relegated to urban radio and their mostly black fanbases. “It’s a race thing,” he continued. “It’s always going to be a race thing. For one, if I took my records off of Spotify, it would affect the people who listen to my music for free and may not have the means otherwise.”

In other words, urban radio and black artists who don’t have massive mainstream appeal don’t exactly have “Swifties,” whose economic power might be able to keep a roof over Taylor Swift’s head. That’s not the same situation for fans from a community that endures employment and other economic disparities that dilutes its spending power.

Urban radio and black artists who don’t have massive mainstream appeal don’t exactly have “Swifties,” whose economic power might be able to keep a roof over Taylor Swift’s head.

For the vast majority of musicians who don’t have Swift’s notoriety, they get paid poorly by label bosses. They must inevitably rely on their own promotion muscle and organic interest from would-be fans. And they operate under the sordid reality that ad-supported streaming services pay terribly but offer exposure and plays they may not otherwise get from the radio. They still need streaming as part of their business model and can’t dispose of it like Swift can, but the problem remains: Exposure alone doesn’t pay the bills. Equitable revenue sharing from labels and streaming does.

If Swift is going to keep fighting what she thinks is the good fight, she can use her privilege as a major economic force—coupled with pop appeal that’s associated with her mainstream acceptability as a white, female artist—to help organize like-minded industry peers and take label executives to task. After all, an artist like her is set for life. The big bosses, however, are the ones who have reduced artistry to a formulaic, mass-marketed commodity rather than as an authentic sound experience shared with the public and appreciated, in kind, with payment.

Just as Swift has shown Apple, her bosses need her more than she needs them. It’s about time she and her counterparts let them know it. Then again, some already have, in ways both brash and subtle. Did you think Rihanna’s “Bitch Better Have My Money” was just another friendly singalong?