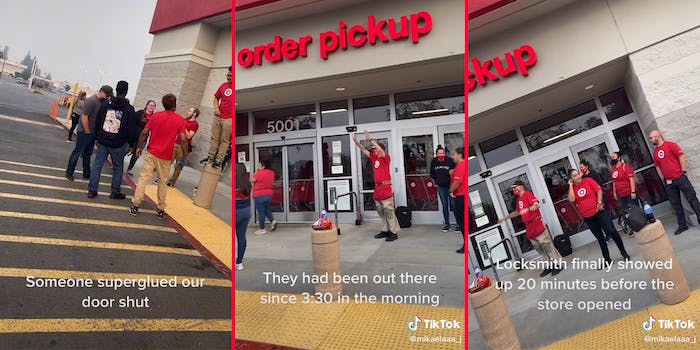 Commenters are blaming the Target vs. Walmart beef.

A viral TikTok video shows Target workers standing outside the location they work at because, according to the TikToker who posted the clip, someone “superglued” the store doors shut.

The caption on the TikTok video, which was posted to @mikaelaaa_j’s account, claims that the workers were waiting outside since 3:30am that morning.

The video, which garnered 7.2 million views and over 762,000 likes since being posted on Aug. 28, pans over Target employees standing in front of the store. “Locksmith finally showed up 20 minutes before the store opened,” the text on the video notes.

The video is captioned: “A day in the life of your typical retail employee.”

“Someone superglued our door shut,” @mikaelaaa_j notes via the caption and using the text-to-speech effect.

Many of the 4,338 comments joked about the Target vs. Walmart rivalry that has been brewing on the platform recently after a Target employee jokingly took a Walmart shopping cart “hostage.”

Some commenters expressed concern that the employees were made to wait outside without pay.

“Can’t believe you waited. It’s a target policy that after 30 mins you can leave and still get paid. It would happen all the time at my store,” said @lillian8697.

“Target has a policy for when the door is superglued?,” responded @thatsagoodpoint to @lilian8697’s concern.

@mikaelaaa_j followed up with a comment on Sept. 3 addressing their concerns: “We got paid for our scheduled shifts y’all… we’re good.” Her followup to the viral video earned over 62,200 likes so far.

The Daily Dot reached out to @mikaelaa_j for comment via TikTok message.