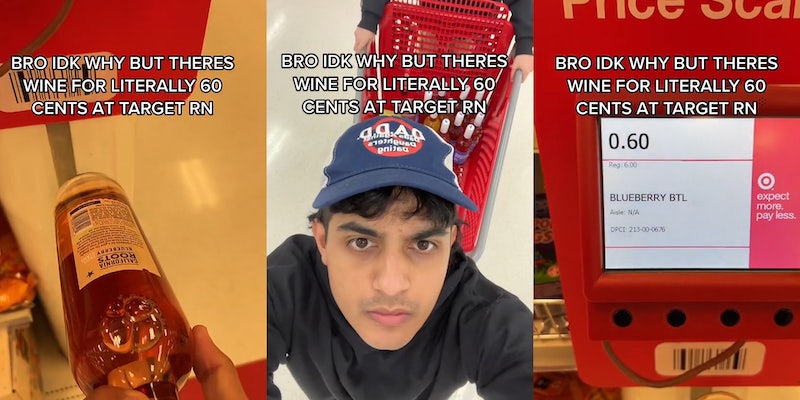 ‘This wine is so good too’: Wine rings up for 60 cents at Target

'Prolly gonna give y’all a raging headache the next day that’s why.'

TikTok users claim to have made an incredible discovery. According to a slew of viral videos, California Roots label wine can be bought for less than a dollar per bottle in some Target locations.

In a video with over 1.2 million views, user Curtis (@curtiswaters) documents the experience of discovering the bottle at a North Carolina Target location, confirming its price, then loading up a cart. The total price per bottle comes out to 60 cents; the original price of the bottle pre-discount is $5.

This too good to be true im kinda scared

It seems that the cheap price only applies to the California Roots Blueberry wine bottle, as every other video on the topic features only that flavor.

TikTok user Grace says she only paid 50 cents for her bottle.

Others claim even lower prices, provided that the customer buys several bottles at once. Advice differs, but many claim one must buy four of the bottles in order to unlock the discounted price.

In comments under Curtis’ original video, users speculated as to why the price is so low.

“Prolly gonna give y’all a raging headache the next day that’s why,” offered a commenter.

“Ur gonna drink 2 and just start feelin the buzz,” claimed another. The wine has just 7.5% ABV per Target’s website, making it slightly more alcoholic than the average beer but less than a typical wine.

Others shared that users shouldn’t get too excited about the discount given that Target’s discounts are generally rolled out regionally.

“Clearance items are specific to each target location,” a commenter explained. “You won’t find the same item on clearance or on clearance for the same price at 2 targets.”

Still, this didn’t stop some users from getting excited about the prospect of cheap wine.

“This wine is so good too,” wrote a TIkToker. “I almost wiped out my target when they had them on clearance.”

The Daily Dot reached out to Target via email and Curtis via Instagram direct message.