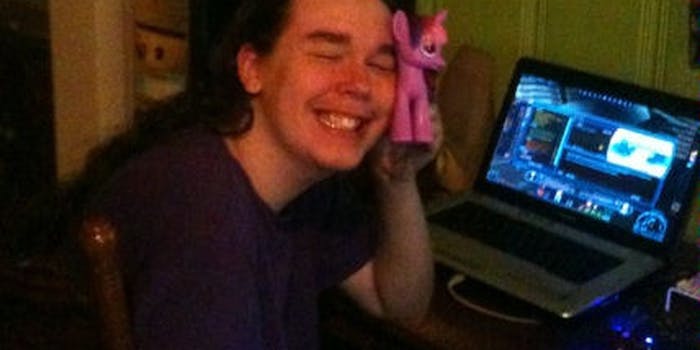 The beloved My Little Pony voice actress called a 15-year-old fan with disabilities to offer personal encouragement and magical friendship.

A mother’s well-timed Facebook comment meant the difference between disappointment and happiness for her brony son with disabilities.

Fifteen-year-old Dragon, who goes by his middle name, was looking forward to meeting My Little Pony voice actress Tara Strong at the Knoxville Comic and Anime Show. But when Strong canceled her appearance, his mother, Rebecca Andrews, wasn’t sure what to do.

On May 31, she wrote on the convention’s cancellation announcement on Facebook:

“Thanks for posting. Just wish she’d cancelled before I paid for the vip pass. Now I have to figure out how to tell my disabled son he won’t be meeting Twilight. :(“

Little did she know that Strong herself was reading the post. Strong quickly contacted Andrews to arrange a phone call with Dragon. In a follow-up posted on the convention’s Facebook page and on a LiveJournal’s EquestriaMLP, Andrews posted some of the highlights:

Tara: Is this Dragon?
Dragon: …yes.
Tara: Do you know who this is?
Dragon: Yes, it’s Twilight Sparkle.

Dragon: Tara, you are so talented with all those voices you do.
Tara: Yes, yes I am, aren’t I?

Tara: (in Twilight’s voice) I love you, Dragon.
Dragon: (stunned, muttering) …love you, too, Twilight.

Tara: Dear Princess Celestia, today I got to talk to an awesome person named Dragon.
Your faithful student, Twilight Sparkle.

Tara and Dragon: Sunshine, Sunshine, ladybugs awake! Clap your hooves and do a little shake!

Tara: (in Raven’s voice) Dragon, if anyone bothers you about liking My Little Pony, I’ll kick their butts.

When the conversation was over, Andrews took a photo of Dragon’s expression and posted it on Facebook.

“She talked to him for about 20 minutes in all, and did every voice he asked her to do, talked a little to him about how to deal with bullies at school, and assured him that there is going to be a season 3 of My Little Pony,” Andrews wrote.

Andrews told the Daily Dot that Strong’s encouragement couldn’t have come at a better time. Dragon, who enters high school next year, was recently put into special needs classes in order to isolate him from bullies.

“Mentally and emotionally he’s at a seven or eight-year-old level, but physically he’s huge,” Andrews said. “One of the main things I hate is when people say he’s bullied because he doesn’t ‘look handicapped’,” she told us.

Strong, who voiced Dil in Rugrats, Bubbles in The PowerPuff Girls, Twilight Sparkle in My Little Pony, and many more, is especially beloved by her fans for her playful Internet presence and Twitter “trolling.”

“It’s still rather hard to believe this actually happened,” Andrews said, “even with Dragon piping up every once in a while, ‘Twilight Sparkle said she loved me.’”