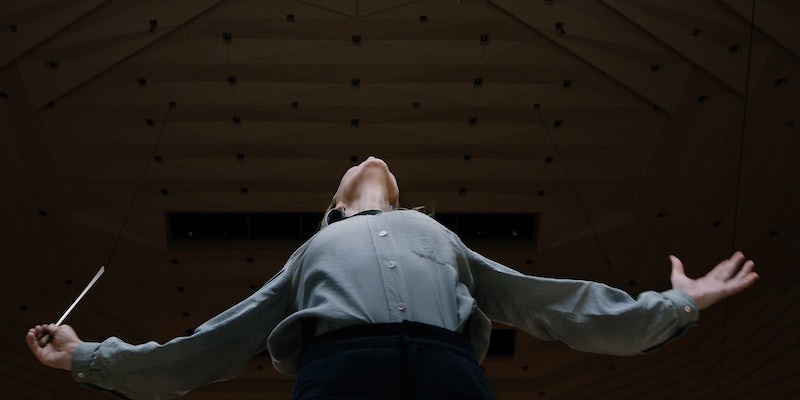 Lydia Tár (Cate Blanchett), the embattled conductor at the center of TÁR, might not be a real person, but she certainly feels like she could be. From an extended recitation of her credentials by the New Yorker’s Adam Gopnik ahead of a chat between the two (including Lydia becoming one of only 15 people in the world to achieve “EGOT” status) to some of her various quirks and even the response to what befalls her, TÁR never takes its keen focus off of her. TÁR might have more questions than answers, but those questions flourish in Todd Field’s character study of a woman at the top of her game who causes her own downfall, all of which might easily fall apart if not for a spellbinding performance from Blanchett.

Release Date: Oct. 7, 2022
Director: Todd Field
Release: Theatrical
A scorching character story of a world-famous conductor at the top of her game and how her actions and hubris bring it all crashing down. Headed by a mesmerizing Cate Blanchett performance, Todd Field takes great care in making the craft at which the titular character excels feel lived-in.

By the time we meet Lydia—first, through the smartphone of someone we don’t see who mocks her, and then at that talk—she’s already achieved almost as much as anyone can in her field. She’s a protégé of Leonard Bernstein’s, she launched a fellowship that aimed to nurture aspiring female conductors, and for the past several years, she’s headed a prestigious orchestra in Berlin, which is about to record a live performance of Mahler’s Fifth Symphony after being delayed to the pandemic. She even has a book coming out soon.

At every turn, Lydia finds herself trying to push past the perimeters the world wants to press upon her. The composers she’s inspired by are all men, though as a female composer, she’s often asked about other female composters. Her idea about potentially opening up the fellowship to men is gently shot down. She scoffs at being labeled as a “Maestra,” quipping that “we don’t call astronauts ‘astronettes.’”

In a particularly striking scene, Lydia prods a BIPOC student in one of her composing lectures who refuses to perform Bach because of the composer’s history of misogyny. She’s trying to teach the student, sure, but she doesn’t seem to care whether her verbal pushing of the dagger inspires him to change his view and open himself up to Bach or stomp out of her classroom in disgust. (In the debate about separating the art from the artist, Lydia is absolutely pro-separation.)

“It seems that the architect of your soul is social media,” Lydia tells that student, like someone who will spend a fair amount of time looking herself up on Twitter once things start to implode.

Lydia Tár might seem cold and calculating to viewers, someone who makes moves that might seem harsh or make little sense to anyone other than herself—and, to a certain extent, she probably is that person. You see it in her treatment of her underappreciated assistant Francesca (Noémie Merlant), an aspiring composer herself, or the way Lydia manages to shut out her wife Sharon (an excellent Nina Hoss), a violinist in the Berlin orchestra who, when Lydia first arrived in Berlin, showed her the ropes.

She’s willing to rotate colleagues out of their positions, overlook the lead cellist for a substantial solo and concoct a way for Olga (Sophie Kauer), a young and talented cellist Lydia sets her sights on, to get the solo instead. The only exception seems to be Lydia’s interactions with Petra (Mila Bogojevic), the daughter Lydia and Sharon adopted. But even that doesn’t stop Lydia from casually threatening one of Petra’s bullying classmates in German or telling Petra about how an orchestra isn’t a democracy.

But the cracks forming at the foundation of Lydia’s musical empire are starting to crack, slowly and all at once, as we see brief hints and glimpses of a former protégé and what might’ve happened for Lydia to do what she did. Blanchett is captivating and embodies Lydia Tár’s selfishness and casual cruelty with aplomb. Even her mannerisms in the two places she keeps, the cold and modern home she shares with her family and the apartment where she struggles to work, differ vastly; in both, she’s haunted by sounds, some without explanation.

Entire scenes focus on the particulars of conducting such as the roles the right and left hands have in the art of conducting (Blanchett actually conducted an orchestra for the film), or whether a clarinet was playing it too loud during one rehearsal scene is the topic of debate; several more contemporary conductors are name-dropped along the way, including one whose career ended in disgrace. If you only know the bare basics of the world of conducting, it’s more than apparent that Field did his research.

Even with a final act that, at times, feels rushed, the building crescendo of Lydia’s downfall feels an inevitability. An incisive glimpse of a singular character who dug her own grave, TÁR is a symphony of a film that strikes hard from its first note, enthralls you the entire way, and will haunt you long after the final note fades.