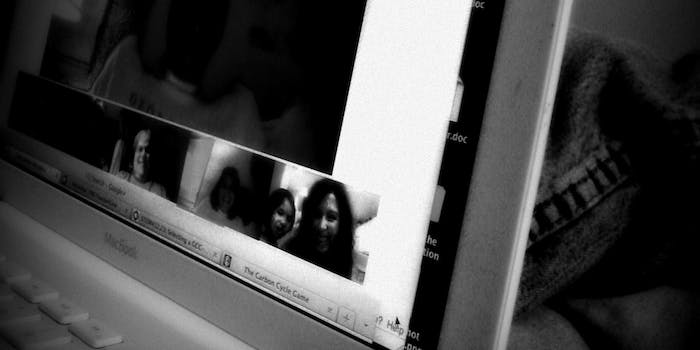 I was hanging out recently at a bar with a group of friends, one of whom (Emily) was intermittently chatting with an out-of-town mutual friend on Google Hangouts on her phone. At one point she reported back, “Steve says to tell you that he hopes you two make out,” pointing at me and another friend.

Half-online Hangouts are super weird. (Have you ever been to a party where one person calls in on Skype to say hi? Is it only my friends who do that? It is bizarre.) In this case, the distance and perceived privacy of the chat box or phone probably made Steve feel empowered to tell a joke that he wouldn’t have said to your faces. Some of the cues that tell a person “this may be inappropriate to say or not come off the way I intended” are lacking when you’re not physically in the same room.

But it sounds like there’s every reason to believe he was just joking. I’m not saying you necessarily DON’T get your friends together by saying “you two should make out”—I’ve seen that work rather well, actually—but people are way more likely to make jokes about intra-social-group sexin’ than they are to try to actually make their friends kiss by banging their heads together. As a joke genre, it’s pretty tried and true (tired and true, you might even say); as a matchmaking formula, it’s a little atypical. If you assume it was a joke, statistics are on your side, and you’ll probably feel a little more relaxed about the whole thing, which is what’s really important.

It would have been polite for Emily to put the kibosh on a crack she thought might make you uncomfortable. She didn’t have to pass it on. But for starters, she may not have realized you’d be embarrassed—and plus, Steve told her to say it. If she was relating something he had said in perceived confidence, that would have been a bit of a violation; obviously he knew there were other people in the room, but I think you can have a reasonable expectation that your physically present friend will not be narrating your virtual communications. It’s more like whispering in public; yes, someone could overhear, but you assume the person you’re whispering to will not then repeat everything you say loudly and clearly for the benefit of those who can’t hear. “STEVE SAYS HE HATES YOUR DRESS!”

That’s not what Emily did, though. She passed on something he told her to pass on, something she probably correctly interpreted as a joke that had no reason to embarrass you. So she’s not the asshole, and Steve’s not the asshole… Does that mean the asshole is you? Well, no, but you are overthinking this. Your friends are ribbing you, not trying to make you mortified. And yes, they’re probably doing it in a slightly more overt and awkward way due to the addition of chat to the picture, but Emily didn’t break any unwritten Hangout rules.

Just tell Steve that if he wants to exert any more peer pressure by proxy, he has to do it using some kind of convoluted scheme, like writing one of you a love letter and signing it from the other one. It’s less easily misinterpreted. (OK, it’s a lot more easily misinterpreted, but it’s also much more entertaining.)