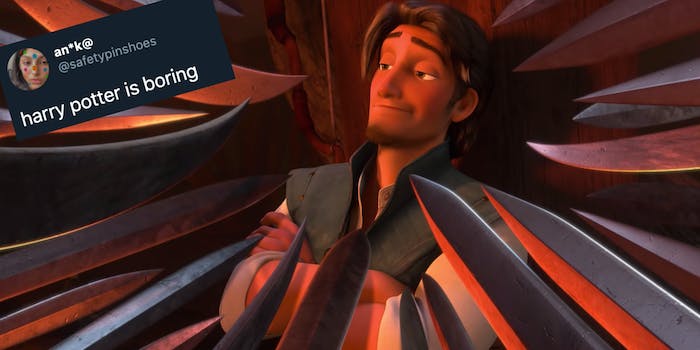 Express your unpopular book opinions with the ‘Tangled’ sword meme

The takes are piping hot.

With enough searching, you can find just about any suspect opinion in some dark corner of the web. Case in point: An unexpected conversation about literature is unfolding online—all thanks to a meme.

The meme comes from one of the best scenes in one of Disney’s finest creations. (Tangled is hands-down among my top five favorite Disney movies, don’t @ me.) Here the film’s male protagonist, Flynn Rider, needs more motivation than your average Disney character to launch into song. Thankfully, a few dozen swords do the trick in the film, motivating Rider to dazzle the audience with his dashing voice and less-than-wholesome motivation.

The still from this shot—of Rider being menaced by a handful or two of sharp weapons—became the meat of the literary meme when user @wordsbornn shared it with an extremely pressing question: “what book opinion will get you in this situation?”

Soon, answers were flooding in.

Many people used the opportunity to call out specific books and authors they considered overrated or contrived.

Shockingly few people went after the ever-controversial J.K. Rowling, instead opting to aim criticism at the Harry Potter series.

There are a few legitimately dangerous opinions buried in this meme. Seriously, it’s not safe to voice these things on the internet.

A handful of users took the opporitunity to push the idea of “new adult” fiction. The genre is still emerging, but aims to provide perspectives from protagonists not in the young adult range of 13-18 and not yet in the grim, crotchety, Rooster Cogburn portion of their lives. The hope is to encourage a few more characters in the prime 18-30 age bracket, which as of now appears to be when all fantasy characters disappear to get horribly scarred and jaded.

Many readers also called for the celebration of more authors of color. The sci-fi and fantasy genres, in particular, tend to be disproportionately dominated by white, cis writers.

The meme trend is populated by hundreds of diverse, sometimes contentious, opinions. In a year when our timelines seem inundated with an unceasing deluge of negativity, this trend comes as a welcome reprieve.